The applicability of existing methods to estimate sorption processes for ionisable organic compounds, particularly in a waste water treatment system, need to be re-examined within a regulatory context. Regressions for KOC recently proposed by Franco and Trapp (2008) (Table 10, Section 3.2.4) for monovalent acids and bases, for instance, developed from soil-water sorption studies, provide a basis for addressing this need. Given the different composition and electrical properties of sewage sludge compared to soils, it is possible that the partitioning behaviour within a waste water treatment plant may differ from sorption to soils. As discussed above, derivation of improved estimates for the KOC of sludge are likely to be particularly important for bases.

It is reasonable to assume, given the high concentration of organic matter characteristic of primary and secondary sludge solids, that normalisation to organic carbon to describe partitioning (Kd = KOC × OC), even for ionisable organic compounds, could represent a valid approach when attempting to improve estimates of partitioning to solids in a waste water treatment system. Based on this assumption secondary sludge-water partition coefficients normalised to organic carbon (KOC,sludge) for a number of monovalent bases with pKa values > 5 were collected from the recent scientific literature. In total 66 KOC measurements were collected for 48 substances, including 3 biocides, 7 industrial chemicals and 38 pharmaceuticals, some of which were measured in different studies and sludges. The database is presented in Table 14, together with the DOW values estimated with either SPARC or ACD at pH 7.

When the estimates for log DOW in Table 14 were plotted against measured log KOC values, a positive slope with a coefficient of determination r2 = 0.64 was observed (Figure 16). The line represents the linear regression. 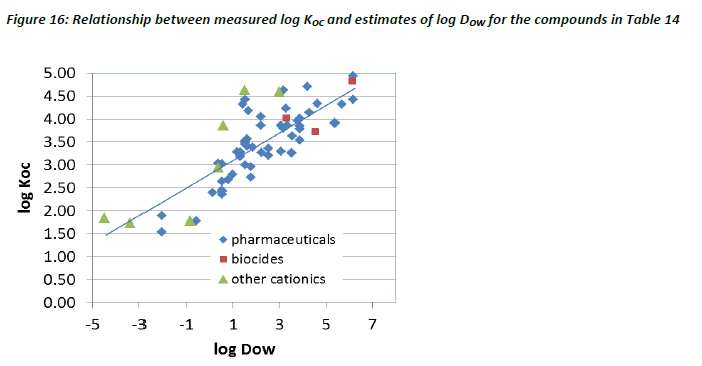 The observation of a potential relationship between KOC and DOW observed in Figure 16 is in contrast to a similar attempt to correlate these properties by Hörsing et al (2011), who failed to observe any significant correlation. The inconsistency between the data shown here and that of Hörsing et al (2011) can be partly explained by the poor estimates of DOW (i.e. based on KOWWIN), in combination with the inclusion of substances with different electrical charge used in their interpretation. The current assessment, however, utilised a more robust estimation programme for DOW estimates, and reduced variability in the interpretation by focusing the analysis on monovalent bases with pKa > 5. This is because the inclusion of acids, for which sorption to solids are less important than for bases, as illustrated in Figures 14 and 15, has the potential to introduce a significant level of variability in the potential relationships.

The observation that a relatively good correlation can be observed for monovalent bases, suggests that the derivation of a simple linear regression model, based on DOW (calculated at pH 7), is possible. This relationship has thus been calibrated to estimate the KOC (sludge) for bases:

The equation has a mean square error of 0.38 on the log KOC. The regression may thus be used as a lower tier estimate of the KOC of monovalent bases. This analysis has consequently resulted in a revision to the SimpleTreat model, whereby inclusion of equation 34 has recently been proposed as replacement for the default assumption of KOC = 0 for cationics in models such as SimpleTreat (Franco et al, 2013). However, the regression reported in Figure 16 (r2 = 0.64) does not explain all the variance observed. This is not unexpected, since it is reasonable to expect that factors, other than hydrophobicity, may strongly influence sorption of cationic organic compounds to sludge. For instance, it is probable that in some instances electronic interactions between the positively charged chemical and negatively charged surfaces in the environment can result in significant interactions. These interactions, however, will likely require that the electric charge of the chemical and that of the surface are free to interact, and therefore are not prone to steric hindrance. It can also be observed that the correlation shown in Figure 16 appears to be less significant at log DOW < 0, where hydrophobic interactions are likely to be relatively weak.