The practice of ERA of chemicals used in commerce is well established in a large number of jurisdictions. Guidance on how to perform an ERA, however, is primarily based on an understanding of the environmental fate and behaviour of neutral industrial chemicals, assuming generic modes of action and transport (Tarazona et al, 2009). There is a growing concern that the underlying assumptions used in a typical ERA do not accurately capture the environmental fate and behaviour of chemicals that ionise at environmentally relevant pH, are permanently charged, or are of unknown variable or biological composition. Estimates suggest that > 80% of APIs are ionisable organic compounds (Section 1.1); consequently their ERA must accurately reflect both the neutral and ionised species. For instance, at a given pH the fraction of an acid or base present as the anion (–ve) or cation (+ve) can be expressed as: 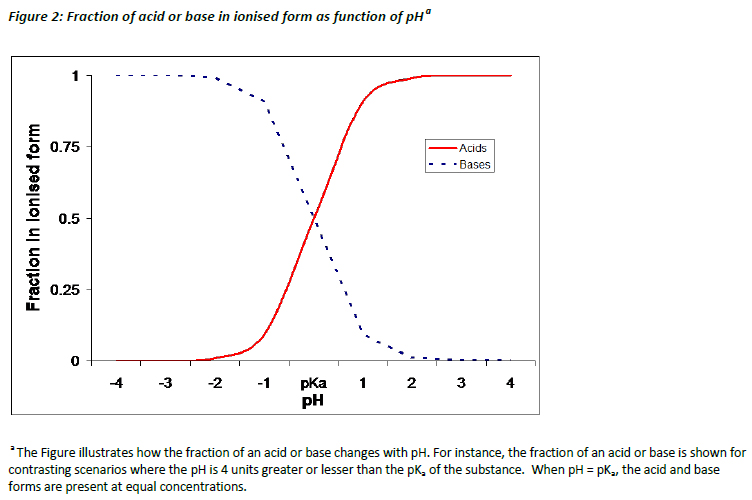 Equation 1 is used within the TGD as a correction factor for adjusting the partitioning properties of an ionisable organic compound. Thus the KOW of a substance is adjusted by multiplying by á. For example, an organic base with a log KOW of 4 and pKa of 7 will have a corrected log KOW value of 3.7 at pH 7. This simplistic approach acknowledges that the neutral and ionised forms of an ionisable organic compound will behave differently in the environment. This is an extremely important observation. Depending on the process considered, either the neutral or the ionic species may be the dominant factor influencing the environmental fate and behaviour of the chemical, even if the amount of that species is relatively small. Complicating this understanding, however, is the existence of ionisable organic compounds with more than one acid and/or base functional group with pKa values at environmentally relevant pH, which can lead to the formation of zwitterions (ions carrying a +ve and –ve charge). For these substances, relatively small changes in pH can dramatically influence the species most strongly influencing environmental fate, thus creating significant challenges with respect to ERA.

A number of physical-chemical and fate properties used for ERA are potentially influenced by changes in pH. Table 1 lists the information typically required in the EU and USA.

Most of the properties listed will reflect the neutral species, with minimal effort being made to determine the properties of the ionised species. One possible explanation for this is that the water solubility of the ionic form of an organic acid or base will typically be several orders of magnitude higher than the solubility of the neutral species. Given the limited and variable data regarding the solubility of organic salts, a general rule is often to assume that the ionised species will not be available for partitioning to air or organic material, and is thus entirely present in the dissolved phase. The total concentration in solution of the compound (non-dissociated and dissociated forms) is therefore strongly pH-dependent, and can be approximated by the fraction in neutral form, as defined by á (Equation 1).

Assumptions regarding the aqueous solubility of the ionised species will reflect how the air-water equilibrium partitioning, or Henry's Law constant, is defined. In this instance, it is generally assumed that the ionised species is non-volatile and will not be present in the gas phase. The air-water distribution ratio (DAW) can therefore be simply given as the product of the fraction in non-dissociated form (á) and the air-water partition coefficient constant of the neutral compound (KAW). Chemical equilibrium partitioning, however, does not consider that some ionisable and surface active substances can be enriched at the air-water interface (boundary layer). Since the specific surface area of aerosols (cloud, mist and fog droplets) is usually large, the sorption capacity of the air can be high. This may have a significant impact on the fate of such compounds, and consequently for their long-range atmospheric transport and persistence (Rayne and Forest 2010; Franco et al 2011). 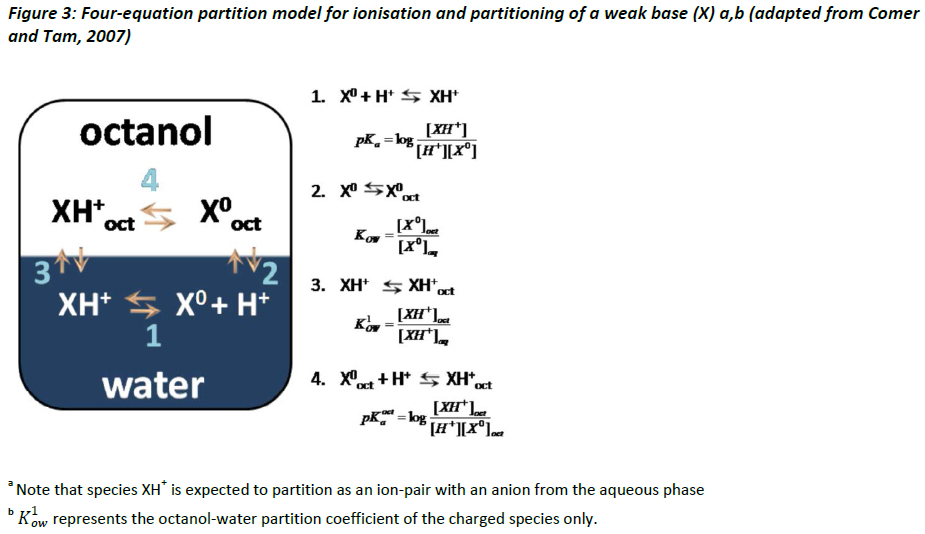 Based on the information provided in Figure 3, DOW can be defined as:

The relationship described above and in Figure 3 also applies to a monoprotic acid. For multiprotic acids and bases, the equation is:

In order to understand the behaviour of an ionisable organic compound it is thus necessary to obtain values for each of the ionisation constants and to measure DOW with varying pH. For ERA, measurements of DOW should be made within an environmentally relevant pH range, usually between 5 and 9.

A major challenge in utilising measurements of DOW or KOW for an ionisable organic compound relates to how this information is used to estimate the partitioning to natural organic phases. The estimate is normally based on single parameter relationships, such as those that relate the KOC to KOW, or those that attempt to estimate bioconcentration factors (BCFs) based on KOW, since it is known that these natural organic phases will exhibit charged functionalities.

Figure 4 shows the extent of ionisation that may exist for certain compounds, noting the range between log KOW and log DOW values (at pH 5 - 9). As expected, log KOW is a conservative estimate of the lipid partitioning; when the compound's potential to ionise is taken into account, the overall partitioning for all of its species (ionic + neutral) may be considerably less. For 35 compounds within of the API dataset (Section 3.1) where there were measured KOW and DOW data, 67% of the values were within 1 log unit, but for 17% they differed by 3 to 5 log units. The implication of the extent of ionisation and its role in partitioning into lipids, or sorption to the organic content of solids, is not necessarily related solely to this octanol-water partitioning. [It is noted that, for about 50% of substances, the DOW value is less than the existing KOW value of 3.0 or 3.5 that triggers BCF testing or PBT testing, respectively.] 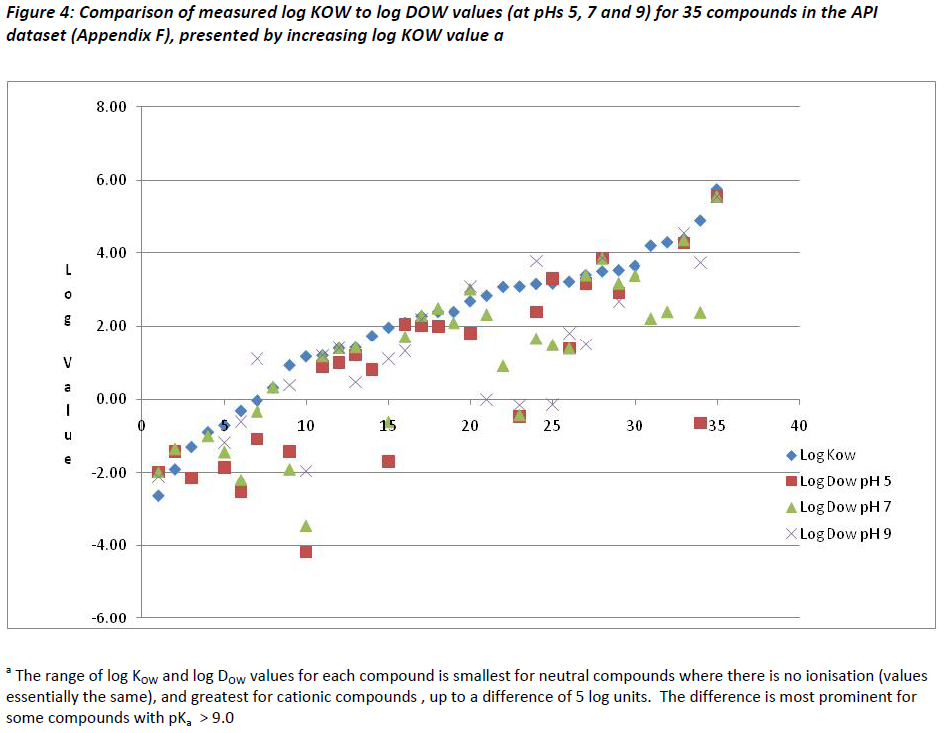 It has been suggested to utilise equilibrium partitioning for specific classes of compounds, such as perfluorinated carboxylic and sulphonic acids, when the hydrophobic component dominates their sorption. For cationic and anionic chemicals, where the surface charge area of the molecule prevails, deviations from the equilibrium partitioning model could occur (Webster and Ellis, 2011). Thus, caution is warranted when attempting to make extrapolations between KOW and KOC or BCF, since octanol does not contain any charged functionality. Therefore, the extrapolation to natural organic phases may not always be applicable.

The next sections of this chapter summarise the available international standard test methods used to measure the acid dissociation, partitioning, sorption (physical-chemical), hydrolysis and biodegradation (fate) properties required to conduct an ERA, and comment on the applicability of the test method towards ionisable organic compounds. Where significant problems are identified, recommendations are provided on how the method could be modified to account for the ionised species. Details and references of the methods are provided in Appendix A to E.