Evaluating the equilibrium or steady-state partitioning of ionisable organic compounds between various environmental media, such as air, water, soil, and biota, can provide useful insight regarding which media the environmental risks for a chemical with a specific set of physical-chemical properties may be most important. This information can then be used to prioritise ecotoxicological testing and/or environmental monitoring aimed at better quantifying exposure and providing a more relevant assessment of the risk associated with that substance. (Trapp et al. 2010) have described the parameterisation for a multimedia model based on the activity approach applied to a lake system, with a surface area of 106 m2 and a depth of 3 m; sediment depth of 0.03m; atmospheric height of 500 m; and 1000 kg of biota. Using this modelling framework, the Task Force have adopted a .chemical space’ approach for evaluating the steady-state, equilibrium partitioning of chemicals, with an emphasis on assessing how the partitioning behaviour of chemicals might change as a function of pH, pKa, and their partitioning coefficients. To do this, the Task Force have selected a chemical space that covers the region of -5 < log KOW < 8, and -10 < log KAW < 0 on a grid of 1 log unit, while holding the pKa at 4, 5, 6, 7, 8, 9 and pH at 5, 7, and 9, for both acids and bases, respectively. This evaluative approach thus produces 36 separate chemical space plots (Figures 14 and 15). 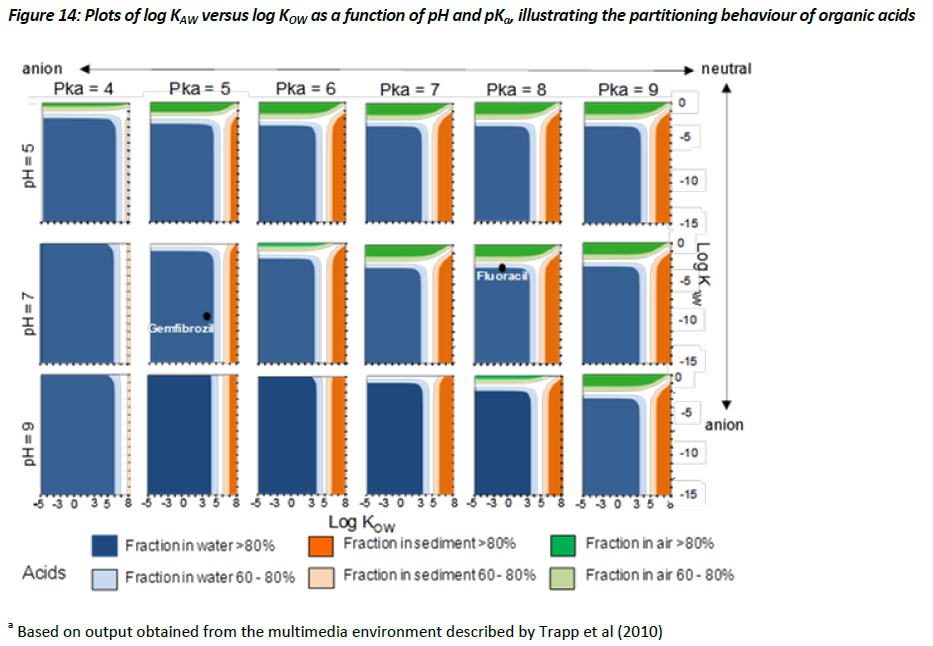 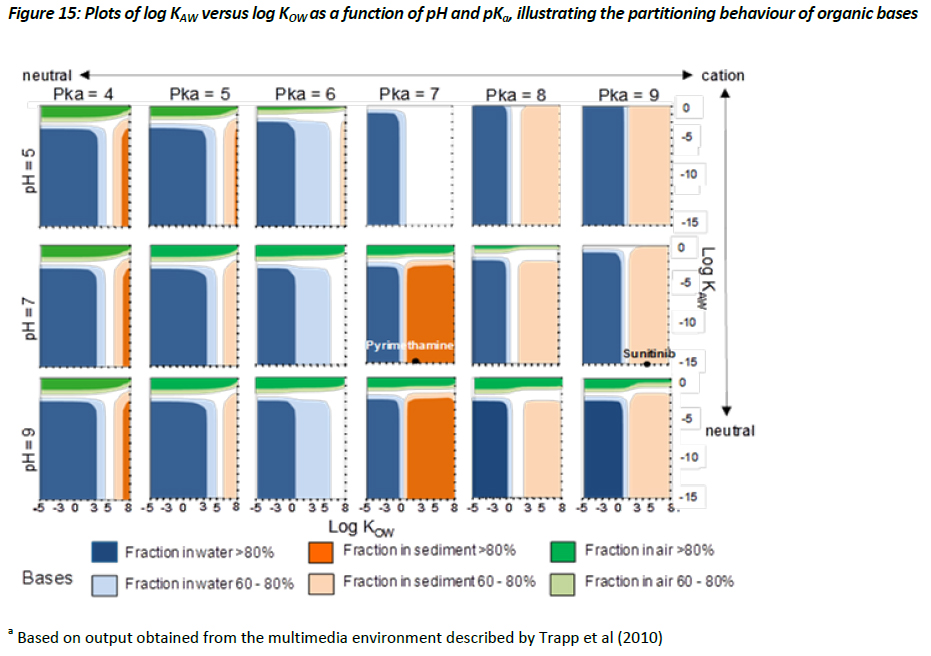 The results illustrated in Figures 14 and 15 demonstrate how the behaviour of acids and bases differ from one another, with the suggestion that the sorption of ionised bases (i.e. cationics) being significantly greater than that of the ionised acids (i.e. anionics). This observation is based on regressions defined within the multimedia model that estimate the sorption behaviour of cations differently from anions (see Table 4, chapter 3). The observations illustrated in Figures 14 and 15 are useful in that they suggest that cationic materials with relatively low log KOW values (i.e. > 1) may partition to a relatively significant extent, and thus sorption to solids can be an important fate process, whereas ionised acids even with relatively large log KOW values may show limited partitioning to solids. Consequently, assessing the removal processes for acids and bases within an ERA when deriving a PEC estimate should be handled separately, adopting the appropriate regressions. Currently, within SimpleTreat and SimpleBox, for instance, this is not the case. The current approach assumes that the ionised species of an acid or base is present entirely in the dissolved phase, which can lead to an overestimate of the PEC, particularly for the charged species of bases.

To further illustrate how Figures 14 and 15 can be used to help prioritize ecotoxicological testing strategies for a particular substance, the position of four APIs was plotted within the chemical space. The properties of two acids (gemfibrozil and fluoracil) and two bases (pyrimethamine and sunitinib) taken from the Appendix have been selected. Gemfibrozil is a monoprotic acid with a pKa value of 8 and a measured log KOW (neutral species) of 3.9. Based on a log KOW >3.5 it is possible that concerns regarding the potential for bioaccumulation could be raised under some jurisdictions, which could trigger BCF testing. Using the chemical space illustrated in Figure 14, however, it can be demonstrated that the equilibrium partitioning of gemfibrozil is projected to be >80% to the aqueous phase. This would imply that the fate of gemfibrozil will be largely governed by its fate in the aqueous phase. This appears to be supported by observations by Ra et al. (J. S. Ra, S. Y. Oh, B. C. Lee, and S. D. Kim. The effect of suspended particles coated by humic acid on the toxicity of pharmaceuticals, estrogens, and phenolic compounds. Environment International 34 (2):184-192, 2008. ) who observed negligible sorption of gemfibrozil to suspended particles. In this instance, the presence of humic acids thus had no influence on bioavailability and therefore did not modify the toxicity (Ra et al, 2008). On the other hand, the physical-chemical properties of pyrimethamine, a monoprotic base with a log KOW (neutral) of 2.69 and a pKa of about 7, places it in Figure 15 in a region where this substance has the potential to show equilibrium partitioning that would favour the sediment phase. Testing for this substance should thus consider the influence of humic acids on bioavailability, as this may likely have an influence on the results of aquatic toxicity testing. Additionally, it may be of interest to assess the toxicity of pyrimethamine to sediment dwelling organisms. A similar strategy should be employed for sunitinib shown in Figure 15 to have the potential for significant partitioning to sediment. Consequently, the equilibrium partitioning illustrated in Figures 14 and 15, for acids and bases respectively, can provide an initial screen regarding the potential exposure scenario. As expected, acids and bases will be influenced by different processes, and should thus be considered independently from one another. Although the output from the model developed by Trapp et al. (2010) is illustrated in a graphical form, this model and the MAMI model would typically be used to provide more specific information regarding the environmental fate and behaviour of individual chemicals.

The projected partitioning illustrated in Figures 14 and 15 are strongly influenced by the regression coefficients that define partitioning to organic carbon (KOC). The regressions used in this instance are those defined by Trapp et al. (2010), and are summarised as:

Where log KOW,n is the octanol-water partition coefficient of the neutral molecule, and f is calculated from the apparent KOW at pH 7 (the DpH=7): f = D/(D+1).

For cations (1) the regression is obtained by log-linear regression, and considers only hydrophobic interactions, whereas for cations (2) a non-linear fit to the data has been obtained, which attempts to account for the electrical properties of the cation (Trapp et al, 2010). We highlight exactly how projections of partitioning to the sediment compartment have been made because the regressions derived are critical for projecting freely dissolved concentrations. The importance of developing more robust and reliable estimates of KOC is explored in greater detail in the next Section and is further emphasised based on the learnings from the agrochemicals industry.