It is estimated that about 3,000 different chemical substances are used as APIs, and that the environmental fate and behaviour for only a small subset of these chemicals have been investigated (Richardson and Ternes, 2011). Consequently, the environmental fate and effects of APIs is an area of emerging concern. Based on work by Manallack (2009), who demonstrated that the majority of APIs are ionisable organic compounds (Section 1.1), it seems reasonable to assume that improvements to adequately assess the environmental risks of APIs need to focus on ionisable APIs.

It is well understood that the fate of chemicals in the environment is controlled by a combination of factors. First, are the prevailing environmental conditions, such as temperature, flows, physical and chemical composition of environmental media, and pH; second are the properties of the chemical that influence partitioning and reactivity; and third are the patterns of use, how is the chemical emitted to the environment, and is the emission episodic or continuous. Addressing each of these factors are essential components to the ERA framework. For ionisable organic compounds, understanding and predicting how changes in the physical environment might influence the speciation and thus the fate and behaviour of the chemical is an area that is currently poorly understood (Boxall et al. 2012).

Over the last several decades there has been a great deal of effort that has gone towards assembling physical-chemical property data for a large number of neutral organic chemicals used in industrial applications or in general commerce. This information has been useful in helping define a variety of QSARs, which in turn are hoped to be useful in estimating environmental partitioning, reactivity, and uptake and effects on biota. In the case of pesticides, the application of QSARs has proved to be complicated by the large number of chemical classes, the frequent complexity of molecules, and the lack of experimental data needed to construct reliable QSARs. The current situation for APIs, with respect to the availability of reliable QSARs, is very similar to that of pesticides, except that it could be argued that the available data for APIs contains even greater variability than exists for pesticides. As discussed in Chapter 2, much of this variability can be attributed to analytical difficulties associated with measuring the various properties, or with the appropriateness of the test method. Additional analytical challenges are encountered when attempting to measure concentrations of APIs at very low concentrations.

In an effort to address the applicability of QSARs to estimate key property data, such as KOW and KOC, the Task Force assembled a database of chemicals used as APIs for which measured data have been made available. The database contains data for 81 APIs, including experimental data for pKa, KOW, DOW, BCF, and KOC. The data have been provided from companies represented on the Task Force, and have been produced following GLP guidelines. The data were thoroughly scrutinised and ranked according to the completeness of the property data typically required for an ERA. For instance, 26 chemicals have property data for pKa, KOW, and DOW values measured at three different environmentally relevant pH; 17 chemicals have a similar dataset, except that there are only DOW values measured at two environmentally relevant pH; whereas a further 26 chemicals have only one DOW value. The completeness of the remaining APIs is more variable, and thus greater weight was placed towards those chemicals having the most complete set of property data.

Figure 7 illustrates the distribution range of the first acid dissociation constants (pKa) of the chemicals assembled within the API dataset. As can be seen 52% of the APIs have pKa values within an environmentally relevant pH range (4 - 9). Approximately 44% of the APIs are polyprotic, with 20 chemicals having two pKa values, and a further three have three pKa values. The majority of APIs are ionisable organic compounds (88%), consisting mostly of bases (44%), acids (23%), and zwitterions (21%), whereas 5% are neutral organic compounds and 6% are always ionised. 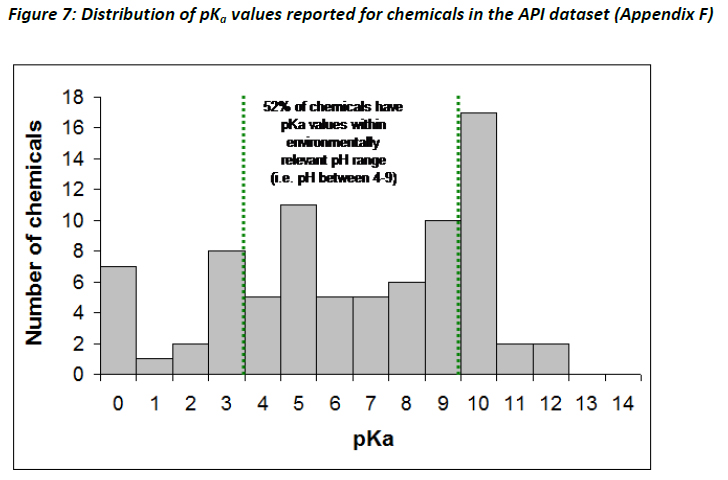 Given the importance of KOW to the ERA framework, as illustrated by Table 5 which summarises the role of KOW as a trigger value for BCF and PBT testing (Section 2.2.4), the task force devoted some energy towards examining the relevance of KOW with respect to ionisable organic compounds. The distribution of log KOW values represented in the assembled dataset is shown by the bar graph in Figure 8, based on measured data available for 40 chemicals among the API dataset. The line with dots shows the cumulative distribution, suggesting that approximately 25% of chemicals have a log KOW value > 3.5, and would therefore possibly require BCF and/or PBT testing in the USA (Table 5 in Section 2.2.4). The relevance of this assumption is further explored in Chapter 4. 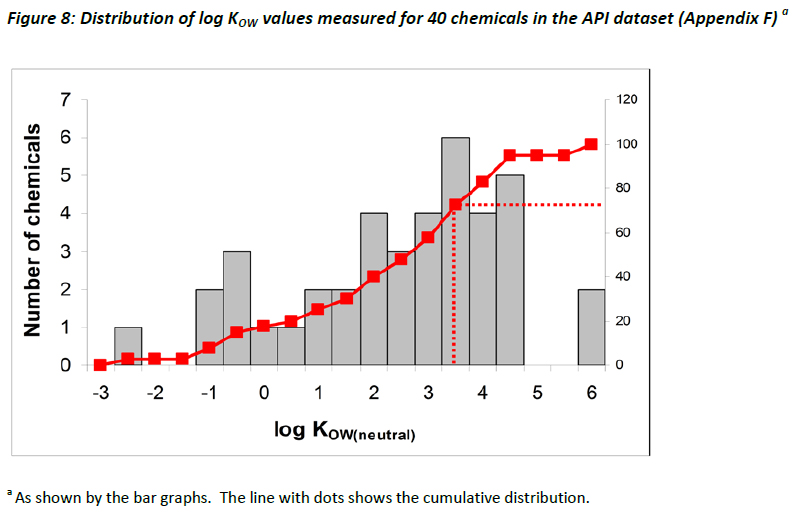 In general, given the relative distribution inherent in the dataset, the assembled data are considered representative of the physical-chemical properties of APIs found in consumer use, and are thus useful in assessing the applicability of various QSARs for estimating the physical-chemical properties of APIs. Consequently, the data were used as a benchmark to assess QSAR performance and comments were made on their respective applicability. Ideally, the estimated values should correspond closely with measured values. Where there are significant discrepancies, however, the message that there remains a need to improve the estimation method in terms of accuracy and scope is reinforced.