The presence of active pharmaceutical ingredients (APIs) in the environment is not an area of new research. As far back as 1985, a review of the fate of pharmaceutical chemicals in the environment raised many of the issues that are still of concern today (Richardson and Bowron, 1985). It then took a decade, until field observations were made that sufficiently demonstrated an ecotoxicological effect on whole populations of fish following exposure to APIs (Harries et al, 1996, 1997), that research in this area began to grow. The trend is illustrated by results from a search of the literature on ‘pharmaceuticals’ and ‘environment’ for articles published in journals with an environmental focus (Figure 1). 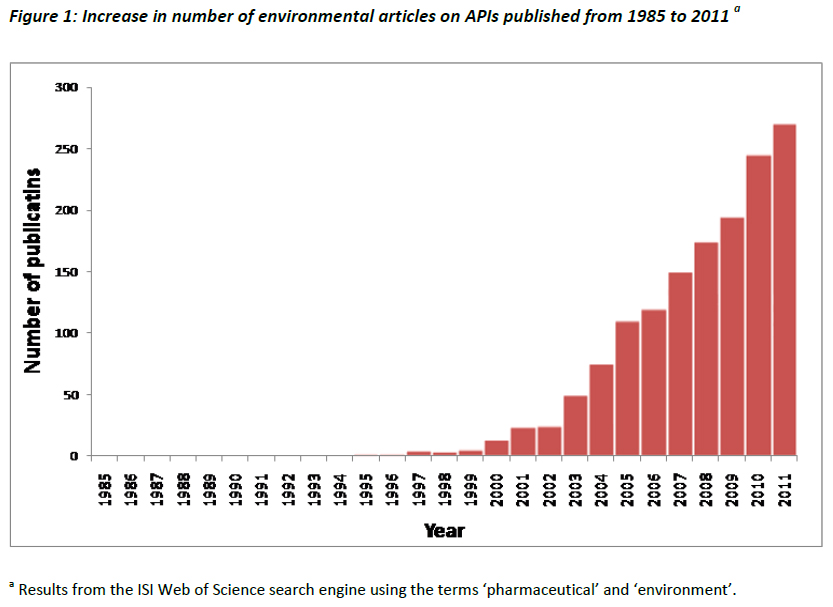 Although it is not an exhaustive search, Figure 1 does demonstrate that there has been a significant growth of research in this area beginning in the late 1990's. For the first time pharmacologically active substances had been shown to have a significant, long lasting environmental effect. Perhaps the most seminal initial study was conducted on behalf of the US Geological Survey, involving a nation-wide reconnaissance of rivers and streams. The authors were able to detect APIs, hormones and other organic wastewater contaminants in 80% of the 139 locations investigated, causing widespread public debate (Kolpin et al, 2002).

A review of the removal of pharmaceuticals and personal care products (PPCPs) during wastewater treatment showed a large variation among removal efficiencies of the contaminants. The authors assumed that this was due to the different molecular structures of the APIs (even within the same class of compounds), but also to the large variability of a number of factors within the wastewater treatment process itself. In particular, treatment plant configuration, hydraulic residence time, sludge residence time, contaminant presence, and temperature could all have an effect on compound removal to some extent (Onesios et al, 2009). Nevertheless, a further study on wastewater treatment of more than 100 micropollutants, including a number of APIs, indicated that secondary biological processes were significantly more effective at removing micropollutants than primary settling processes. For activated sludge processes, the authors reported > 50% removal for 70% of the micropollutants analysed. Membrane bioreactors and tertiary treatment were able to raise micropollutant removal rates still further (Choubert et al, 2011). Improved understanding of the fate of these APIs, the majority (up to 85%) of which are ionisable organic compounds (Manallack, 2009; Section 1.1), in wastewater treatment systems is thus an important component towards producing a more reliable environmental risk assessment (ERA) in each case.

The release of ‘ionisable compounds’ (where behaviour depends on pH, ionic strength, etc.), such as APIs, into the environment presents the risk assessor with particular problems. The Scientific Committee, therefore, agreed terms of reference and established a task force to examine the various parameters that might influence the environmental fate of ionisable (organic) compounds and provide guidance on how the ERA could be improved. Members of the Scientific Committee are stated at the end of the report.