The subject of estimating chemical properties from molecular structure and from related properties represents an area of active ongoing research. The ability to predict the behaviour of a chemical substance in a biological or environmental system largely depends on knowledge of the physical-chemical properties and reactivity of the chemical and closely related compounds. Chemical properties frequently used in an ERA include melting/boiling temperature, vapour pressure, various partition coefficients, water solubility, Henry's Law constant, sorption coefficient, bioconcentration factor, and diffusion properties. Reactivities, such as biodegradation, hydrolysis, photolysis, and oxidation/reduction are also critical determinants of environmental fate, and therefore typically used in risk assessment models, such as EUSES and the ECETOC targeted risk assessment. Unfortunately, measured values are often not available and where they are available, the reported data may be inconsistent or of doubtful validity. In these situations it may be appropriate and even essential to use estimation methods.

The relative importance for developing improved methods for estimating properties of ionisable organic compounds has been demonstrated in a number of recent studies that suggest that a significant number of chemicals used in commerce are partly or completely ionised in natural aquatic systems (Franco et al, 2010; Rayne and Forest, 2010; Boxall et al, 2012). Given that the majority of QSARs currently used within the regulatory framework have been typically developed on data based on neutral organic compounds, there is cause for concern regarding their use for ionisable organic compounds. In these instances, caution should be used in interpretation of estimated data. In this chapter, a review is presented of a number of commonly used property estimation methods, with an attempt to focus on methods defined as being applicable to ionisable organic compounds, such as SPARC and ACD, and methods that are more widely used, such as the EPI-Suite package of estimation programmes. Table 8 summarises the property data reviewed and the property estimation methods commonly used to estimate them. It is not a comprehensive list. For an in-depth review for methods used to estimate KOW, please refer to Mannhold et al (2009), who review 30 state-of-the art methods, against 96,000 compounds. Liao and Nicklaus (2009), on the other hand, compare nine estimation methods for predicting pKa values specifically for pharmaceutical substances. Doucette (2003) critically reviews a number of QSAR approaches for predicting soil-sediment sorption coefficients, or KOC, and Pavan and Worth (2008) review estimation models for biodegradation. The references listed above provide a thorough summary of each of the methods, whereas the purpose of this chapter is to focus on those methods that are commonly used in the ERA of ionisable organic compounds, by industry and comment on their performance and applicability. 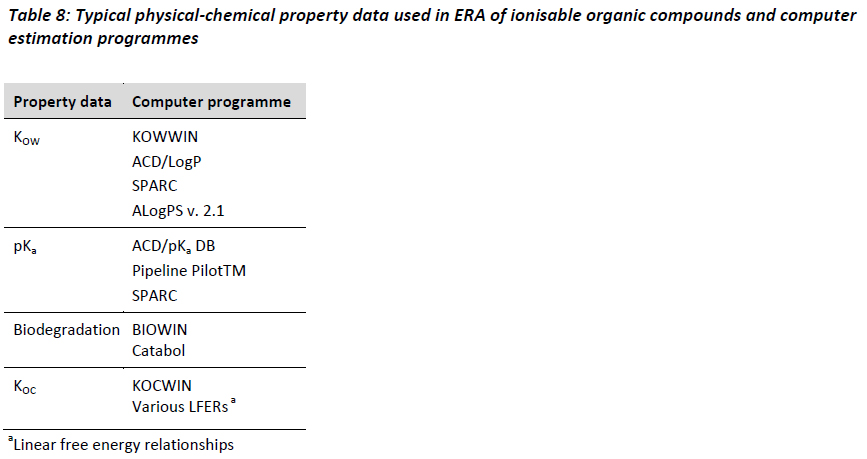