Fate, transport, and risk assessment models all contain terms for sorption to organic carbon in soils, sediment, and sludge. Sorption to solids is often the key process that controls the removal of organic compounds in municipal waste treatment plants, affecting both the efficiency of the treatment system and the management of wastewater solids. In many instances, a linear relationship between the concentration of chemical sorbed to solids and the concentration in water can exist, which leads to the equilibrium sorption coefficient, Kd. There are a number of variables that can influence the magnitude of the sorption coefficient, all of which are dependent on a variety of intermolecular interactions that can occur between the solute and the solid and aqueous phase, including quantity of organic matter and type, clay mineral content and type, clay to organic matter ratio, particle size distribution and surface area of the sorbent, pH, ionic strength, suspended particulates or colloidal material, temperature, dissolved organic matter concentration, solute and solid concentrations, and phase separation techniques. Consequently, there are instances when a nonlinear sorption isotherm can be observed, whereby a Freundlich model is used to describe the relationship between the sorbed and aqueous phase concentration.

Given the importance surrounding the role of organic carbon in relation to sorption the vast majority of methods that have been developed to estimate KOC are based on chemical descriptors used to define hydrophobicity, in particular KOW and aqueous solubility (S) (Doucette, 2003). Estimation methods based on KOW or S tend to be based on regression analysis. Doucette (2003) summarises a large number of different methods that have been developed to estimate KOC, including both regression-based as well as structural-based models. Doucette (2003) suggests that the use of KOC for predicting sorption of nonpolar organic compounds onto soils and sediments is an appropriate approach, and that even for polar or ionisable organic compounds, or in instances where the organic carbon content of the sorbent is relatively low (< 0.1%), KOC can still be used to provide a conservative estimate of sorption. However, as noted by Doucette (2003), the use of KOC for estimating sorption of organic acids and bases assumes that the neutral form, or hydrophobic component, of the chemical dominates the interactions with the sorbent at the pH of the solution.

Used within a regulatory context, it should be noted that recommendations given in the EU TGD (EC, 2003) suggest that the basic parameters used in the exposure assessment, such as KOW and Kd, are only applicable to the neutral form of a chemical, and that a correction needs to be made in order to assess the undissociated fraction of the compound at a given pH. However, in the absence of measured data the TGD does provide a number of QSARs for specific groups of substances for estimating KOC, but also recommends assessing worst case scenarios by using high KOC values, for instance in the case of cationic substances where it is suggested that strong sorption is known to occur. The TGD also notes that estimating KOC based on corrected KOW values for acids and bases as input to SimpleTreat may lead to an overestimation of the aquatic exposure concentration, since SimpleTreat predicts a low elimination on the basis of KOW, whereas sorption to sludge may be a significant elimination mechanism (EC, 2003).

Table 9 provides a summary of a number of regression-based QSARs that have been proposed for various groups of chemical classes taken from the EU TGD (EC, 2003). Caution is recommended when applying these regressions for ionisable organic compounds. 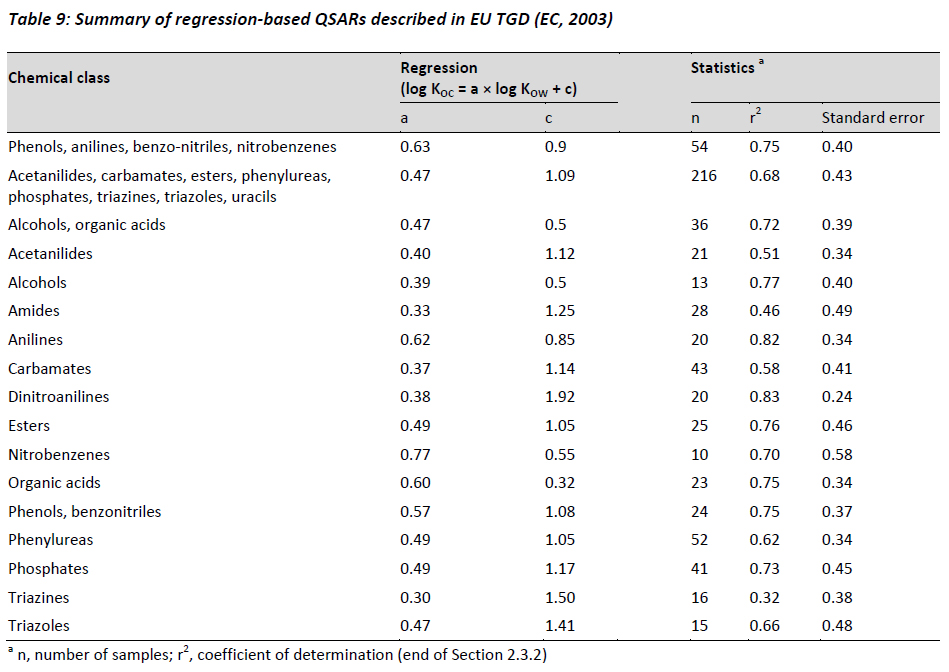 Many of the QSARs described are largely based on polar and ionisable pesticides and industrial chemicals, but may have limited applicability to chemical groups typically associated with pharmaceutical active ingredients. Whereas two regressions listed are applicable for organic acids, there is limited information regarding how to estimate the partitioning of organic bases, amphoters, or other electrolytes. Since it is anticipated that the charged species of an organic base has the potential for significant electronic interactions with negatively charged surfaces in the environment, the lack of a defined relationship likely leads to greater uncertainty regarding the reliance of the PEC calculated for organic bases.

Franco and Trapp (2008) attempted to address the lack of consideration given to organic bases within the EU TGD by investigating the sorption of 164 electrolytes, composed of 65 bases, 93 acids, and six amphoters. Franco and Trapp (2008) expanded the linear regressions summarised in Table 9 to include consideration of the pKa of the acid, base, or amphoter. Table 10 summarises the suggested regressions for the prediction of KOC.

In each of the equations shown in Table 10, the first term quantifies the hydrophobic absorption of the neutral fraction, and the second term quantifies the contribution associated with the ionic fraction. This approach of separating the sorption behaviour of the ionising species from the neutral species is believed to provide a more robust estimate of sorption, as opposed to simply combining both fractions as is the case with the regressions shown in Table 9.

In addition to the linear regression models captured in Tables 9 and 10, other methods including non-linear relationships (Wen et al, 2012), molecular connectivity indices (Sabljic 1987; Schuurmann et al, 2006), and those based on linear solvation energy relationship (LSER) models (Nguyen et al, 2005; Kipka and di Toro, 2011a,b) have also been proposed. Consequently there are a variety of approaches available for estimating KOC, many of which are not formally identified as being applicable for use within an ERA under the EU TGD. Models that appear to be more applicable to ionisable organic compounds, such as the LSERs, non-linear regressions, or those based on molecular structure, tend to be somewhat more complex in nature and may therefore lack the transparency that the linear regression-based approaches defined in Table 9 provide. Thus, from a regulatory perspective, methods that tend to be simple and transparent would be preferable, but unfortunately these methods do not appear to perform well for ionisable organic compounds, typically overestimating the PEC. A confounding problem related to the use of linear regression-based methods pertains to how KOW is defined, i.e. whether it is measured or estimated, and whether the value reflects the neutral or ionised species, and what the pH of the reference system is in relation to the pKa of the substance. Given the importance of KOC in estimating removal of organic chemicals by sorption processes, particularly in a waste water treatment system, there appears to be a need to re-examine how KOC is estimated within a regulatory context, particularly for ionisable organic compounds. This issue is explored in greater detail in Chapter 4.