Since weak acids constitute a significant proportion of herbicides, the behaviour of anions in soil is and has been an important consideration for the pesticide industry. The pKa of the acid can be used to calculate the proportion of the deprotonated and protonated species present in soil and this can be related back to Kd.

For example, Dyson et al, (2002) described the behaviour of the systemic herbicide mesotrione in soil. The following is a summary of their findings with respect to soil adsorption of the compound (Figure 18). 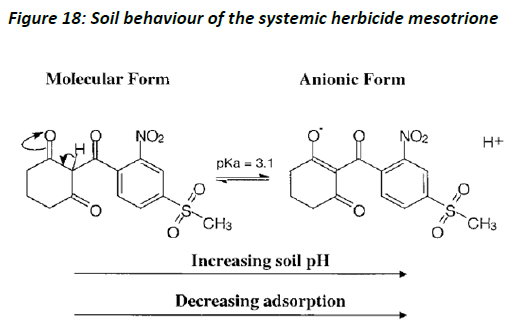 The Kd of mesotrione was clearly shown to decrease with increasing soil pH (Figure 19). 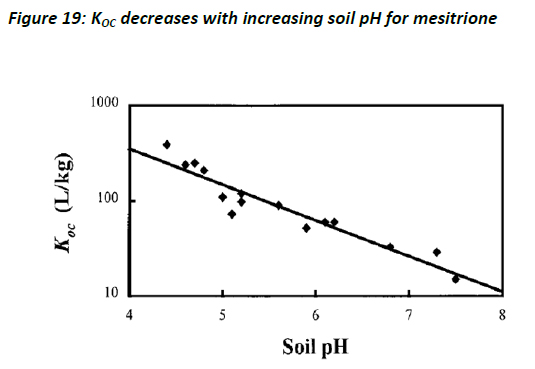 Indeed, when a regression line was constructed from the same data, the equation was:

Dyson et al concluded that both soil organic matter and soil pH were instrumental in determining the soil adsorption characteristics of mesotrione.

Similar soil behaviour was observed for imazethapyr, another systemic herbicide, which was also sorbed to a greater extent at low pH than at high pH. However, at high pH, desorption was less, reducing the availability of imazethapyr residues to plant. At low pH, the compound was more readily desorbed and hence was available to be taken up by crops resulting in injury (Bresnahan et al., 2000).

Where bases are concerned, the behaviour can be very different, because the cationic form can be bound to soil to a greater extent than the unprotonated compound. The interaction of cations with soil can be described by considering the soil adsorption of the herbicide. For example for Paraquat, the experimentally determined soil Kd was vastly in excess of what would be predicted by considering the log KOW or solubility of the compound. The authors concluded that the interactions between Paraquat and the organic matter content of the soil were of little relevance compared to the electrostatic interactions of the cation with the anionic soil matrix.

The soil sorption behaviour of acids and bases can also be calculated departing from their physical properties. Several estimation tools exist, as discussed above (Chapter 3).