The development of pulmonary tumours in rats after particle exposures to poorly soluble, low toxicity dusts occurs only under the conditions of particle overload in the lungs. This pulmonary pathological response in rats to chronic particulate exposures ending in the development of pulmonary tumours at high concentrations is unique, as other rodents, such as mice and hamsters; and other mammals such as humans or non-human primates do not develop lung tumours under similar conditions of particle lung overload from PSPs. The evidence to support this position has been addressed in some of the studies listed above. To summarise the results of those studies: 1) chronic exposures to PSPs at high concentrations leads to develop of lung tumours in rats, but not mice; 2) rats, mice and hamsters have been exposed to identical test substances at identical concentrations of pigment-grade TiO2, ultrafine TiO2 as well as carbon black particles (at particle overload concentrations). Rats, but not mice developed a pathological sequelae of sustained lung inflammation and cytotoxicity, followed by increased cell turnover and fibroproliferative effects (e.g., hyperplasia, septal fibrosis, etc.) ultimately leading to metaplasia and secondary genotoxicity. All of the interspecies studies point to an identical conclusion regarding the unique characteristics of a pathophysiological process operating in the rat, which ultimately leads to the formation of primarily benign lung tumours. The development of pulmonary tumours at particle overload exposures is triggered by the inability of the rat to effectively clear particles from the respiratory tract concomitant with the sustained development of inflammation and cytotoxic effects. Several lines of evidence suggest that the mechanistic differences could be related to the propensity of rats to undergo specific pathological sequelae in response to particle overload conditions. This is initiated by a sustained lung inflammatory and cytotoxicity response, followed sequentially by the development of enhanced cell proliferative activity and corresponding fibro proliferative effects, including septal fibrosis, hyperplasia, and secondary genotoxicity, ultimately leading to the development of lung tumours. Contributing to this pathological effect could be the unique response of rat lung cells to particle overload concentrations – generating "abnormally high” proinflammatory response, concomitant with a deficiency in anti-inflammatory cytokine responses. This would appear to be a plausible "mechanistic recipe” for enhancing the sensitivity or overriding the protective capacity of the rat lung response to particle overload in rats. 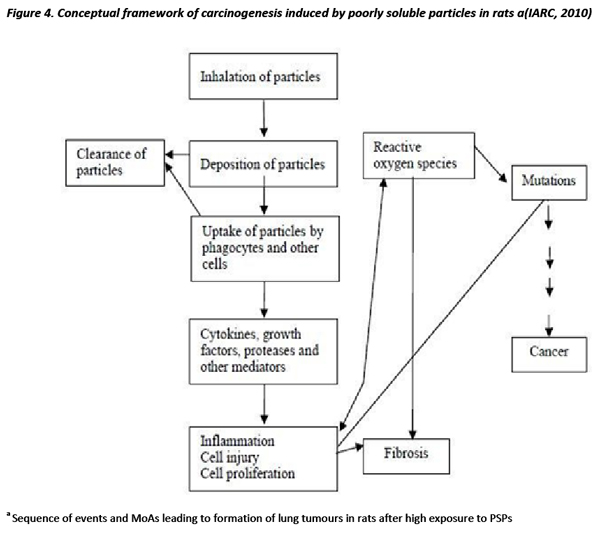 Notably they draw attention to the fact that: "The precise role of chronic inflammation in the development of cancer is uncertain, but there is considerable evidence that chronic inflammation may have a multifaceted role in this process. Activated cells in the lung are known to release various reactive intermediates, most notably those derived from oxygen. Sustained excess of oxidant activity is known to deplete antioxidant defences gradually. These defence mechanisms in the lungs of of humans and rats clearly differ, in that humans are overall relatively deficient in some of them (Slade et al, 1985).” This latter is an important point as it emphasises the potential for differences in pathological response between the two species. In addition, 46 ECETOC TR No. 122
the IARC Working Group agreed with the now generally accepted position that: "The mechanism that involves inflammation and oxidative stress which lead to tumour formation is considered to be a secondary genotoxic mechanism, in contrast to a primary genotoxic mechanism in which the agent interacts directly with DNA (Knaapen et al, 2004).”

Probably, the most illuminating part of the IARC Working Group discussion relates to their deliberations on interspecies extrapolation in which they make use of the cascade of events, illustrated above in Fig 4.2, and try to evaluate these events seen in rats from particle deposition to lung tumour formation to these events in other experimental species and humans. They note that: "An important question that needs to be addressed is the extent to which the steps outlined in Fig. 4.2 Fig. 5.5 for rat lung cancer are also operative in other animal species including humans.”