The development of an AOP depends largely on the identification of the `molecular initiating event`, the relevant intermediate events and the final adverse outcome. Based on above outlined concept it becomes clear that each AOP will have only one `molecular initiating event` and one `adverse outcome` as apical endpoint. With regard to "lung overload" effects following chronic inhalation to PSP of low acute toxicity, obvious species specific differences exist in the `adverse outcome`. Rats are considered to be particularly sensitive towards PSP induced lung toxicity compared to other species. Although an accumulation of particles in the deep lung is a common finding in all investigated species, significant differences in the phenotypic `adverse outcome` between rats and all other mammalian species exist. Lung tumours have been reported exclusively in rats, but not in mice, hamsters, non-human primates or humans. It is well established that lung `overload` contributes to the observed (species independent) pathogenesis of non-neoplastic lung responses, with the significant impairment of pulmonary particle clearance as `initial event` relevant for AOP considerations. Since the induction of persistent neutrophilic pulmonary inflammation, apoptosis, generation of ROS/RNS and increased cell proliferation are also recurring descriptors of events occurring during "overload" triggered lung pathology, they may be regarded "intermediate events" in the sense of an AOP. However, with regard to the final biological effect tumours have to be considered the `adverse outcome` only in rats whereas non-neoplastic changes, e.g. fibrosis, seem to be the `adverse outcome` in other species. Key events in the context of an AOP, which are relevant for the diversion of the so far common mechanistic sequence of effects leading to different outcomes may be the consequence of differently equipped cell systems, e.g. in the diversity of toxification/detoxification systems, like anti-oxidants impacting the degree of resulting `oxidative stress`, apoptosis as well as DNA repair capacity. A simplified depiction of an AOP linking a common initial event with different phenotypical outcomes is shown in Figure 5. 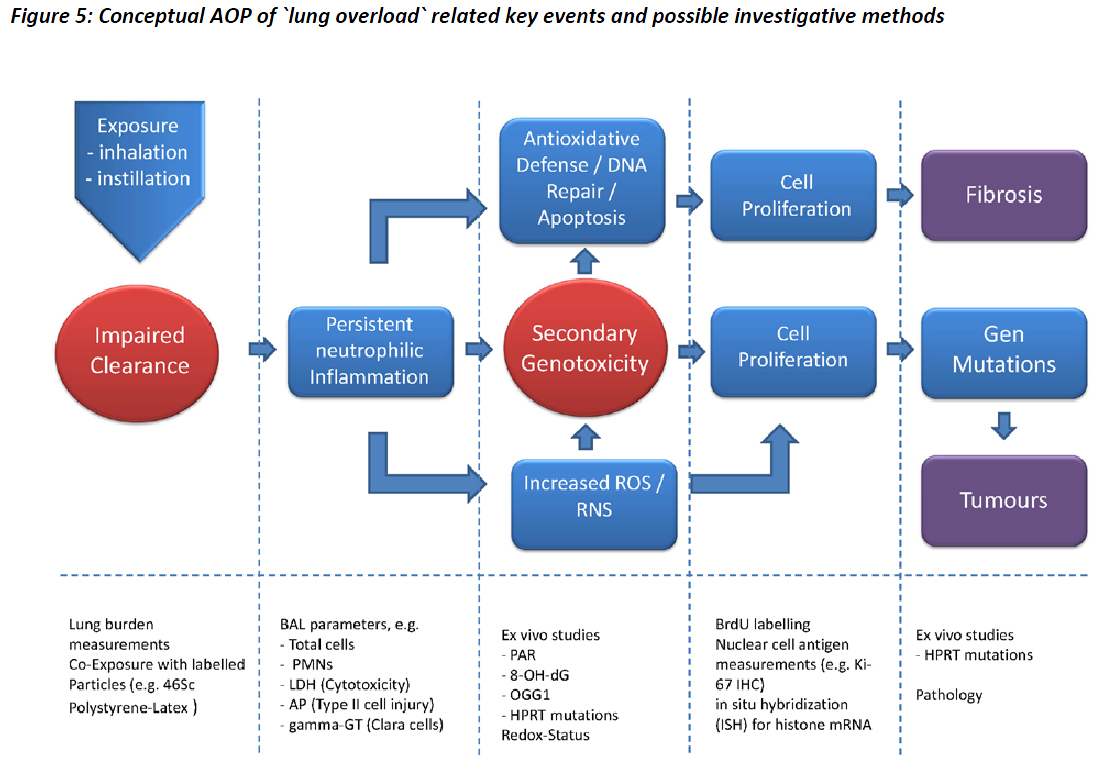