APPENDIX B: Derivation of a human no effect level (‘DNEL’) under REACH’

The European regulation concerning the Registration, Evaluation, Authorisation and Restriction of Chemicals (REACH) should ensure a high level of protection of human health and the environment. Key element within this regulatory framework are `Derived No Effect Levels` (DNEL), which are representing levels of exposure above which humans should not be exposed. While DNELs are defined as safe exposure levels for threshold effects, such "safe” levels cannot be defined for non-threshold effects, e.g. genotoxic carcinogens. In these cases so called DMELs (derived minimal effect levels) have to be calculated which are considered to minimise potential human health risks. Guidelines on how these DNELs and DMELs are to be derived together with recommended assessment factors for different aspects of uncertainty are specified in Reach Guidance Chapter R.8 (ECHA 2010) and Appendix R8-15 (ECHA 2012).

Following this tiered approach, the underlying mode of action and identified dose descriptor provides the "point of departure” (POD) as basis for DNEL derivation. Adjustments of the POD may be necessary to address all local and systemic toxic effects, and to consider all relevant combinations of likely routes, durations and frequency of exposures. The DNEL for the specific endpoint is finally derived by dividing the PoD by a series of assessment factors (AFs). Workers as well as consumers are regarded as subpopulations that require specific DNELs. The most obvious difference in DNEL setting between these subpopulations is that the interindividual (intraspecies) variability in workers is considered to be smaller compared to the general population. 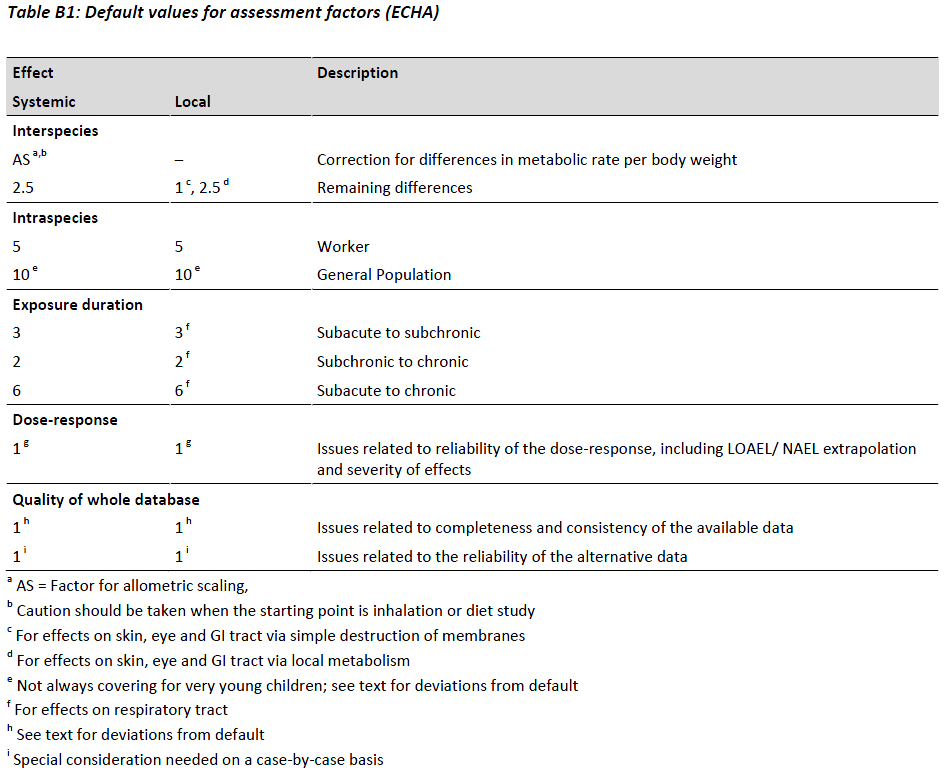 It should be noted, that "simple” multiplication of default assessment factors in many cases will result in overly conservative DNELS. Such formalistic approaches have been already criticised as too overprotective (Fairhurst 1995; Groeneveld et al, 2004; ECETOC 2010) and a recent quantitative comparison of health based European indicative OELs with DNELs revealed that the REACH safety margins were approximately six times higher than those derived by the Scientific Committee for Occupational Exposure Limits (SCOEL), resulting in considerably lower worker-DNELs than the recommended OELs (Schenk and Johanson 2012). Hence, to avoid unrealistic low DNELs, generic AFs have to be critically scrutinised as to their scientific accuracy when discussing DNEL setting for specific endpoints. Especially when dealing with particles (substances) without any known significant specific toxicity, greater flexibility in the use of AFs to not overstating real risks seems to be scientifically justified.