Morrow for the first time considered and calculated particle volume per AM as a quantitative definition of the overload condition. In this context, Morrow mentioned two important issues: 1) particles with higher density would achieve the volume load at respectively higher mass load; 2) the void spaces would increase the volume of phagocytised agglomerates by more than 30%. The volumetric consideration of Morrow was strongly supported by a study performed by Snipes and Clem (1981) with 3-, 9- and 15 μm diameter microspheres simultaneously administered into the lungs of Fischer 344 rats. Although the instilled particle numbers was only 1% of the number of AM in rat, a strongly prolonged retention half time was found for 9 μm particle (580 days) in comparison to 3 μm particles (t½ = 69). The retention half time for 15 μm particles was so long that it could not be determined. A 9 μm particle accounts for 38 % of the volume of a rat AM, it fulfils the overload condition. A 15 μm particle with 1770 μm³ even exceeds the volume of a rat AM. This finding was confirmed by Oberdörster et al (1991) with 3.3 μm (~20 μm³) and 10.3 μm microspheres (~600μm³). The findings of these two studies are consistent with the calculations performed by Morrow and indicate particle volume per cell as an index of overload. Morrow´s hypothesis is appropriate for PSPs with low general toxicity. The fulfilment of these two requirements is however difficult to define; especially in a quantitative way (Section 1.2).

With the possibility of a higher toxicity of nanoparticles in comparison to the larger chemically-identical counterpart Pauluhn (2011) brought the volumetric overload again into the discussion. He modified the overload hypothesis by introducing agglomerate density (instead of physical density) into the calculation of volumetric loading. For the determination of agglomerate density he refers to Klobes et al (2006). He could demonstrate that volumetric loading nicely correlates to the inflammatory response, as indicated by neutrophil counts in lavage fluid, for several PSPs (e.g. AlOOH 10 nm and 40 nm, Fe3O4, and MWCNT).

In a guidance document published by Webb (2001) various definitions of the powder volumes are given. They are illustrated in Figure 1. In the underlying context only the single particle volume is relevant. The envelope volume is given by surrounding the particle by a smooth film. The smaller apparent or skeletal volume takes into account the voids and pores accessible from outside. The true volume of solid material is given by exclusion of the inner pores. 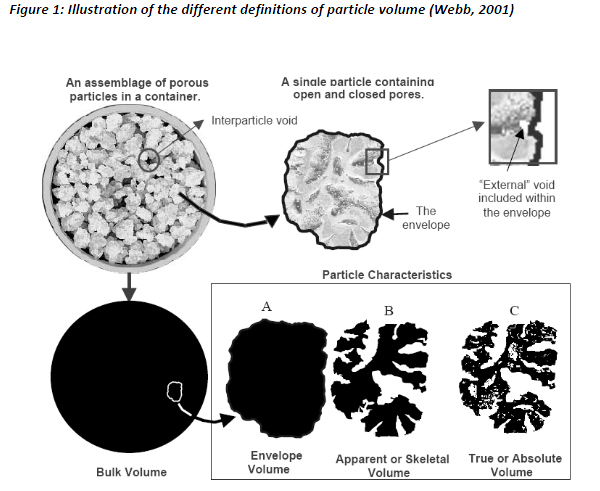 Regarding the volume-based overload concept and the derivation of human equivalent concentrations (Pauluhn, 2011) the density, r, of the dispersed powder is crucial in relating the deposited dose of particle volume to the administered external mass concentration usually available in inhalation studies. The same applies for the task of the derivation of human equivalent mass concentrations for technical powders based on the NOAEL concentrations which are determined in animal experiments using specific powders (such as titanium dioxide, or toner particles). Reliable values of the "true” density of the dispersed product are therefore required (Section 2.2.1).