Particle shape can modulate particle properties in several ways. Shape can have an impact on a particle's aerodynamic behaviour. This effect has been well described for fibres which can reach the deep lung despite their very long length because the aerodynamic diameter is proportional to the fibre diameter and not the length (Jones 1993). A similar phenomenon has been described for disc-like particles such as graphene which can also display unusual aerodynamic properties (Johnson & Martonen 1994, Schinwald et al, 2012). In the case of nanomaterials, the particle shape has been listed as one of the factors determining their toxicokinetic behaviour (Landsiedel et al, 2012).

Particle shape has also been identified as having a significant effect on the ability of macrophages to internalise particles via actin-driven movement of the macrophage membrane (Champion & Mitragotri, 2006, 2009). This phenomenon is independent of surface chemistry and depends only on the local particle shape where the cell attaches. Local particle shape, at the point of cell attachment, has been quantified as the angle between the membrane normal at the point of initial contact and tangent lines drawn to the particle contour near the point of initial contact (Figure 2). This angle, Ω, is essentially a measure of the local curvature that has been normalised for size, the length over which that curvature exists. Length-normalised curvature, as defined by the parameter Ω, is the critical shape feature that dictates whether or not phagocytic internalisation will occur. Local shapes that have low length-normalised curvature (Ω>45°, where 45° is the value for spherical particles) inhibit internalisation while spheres and local shapes that have high length-normalised curvature (Ω ≤ 45°) permit internalisation (Champion and Mitragotri, 2006, 2009). If an AM encounters a high aspect respirable particle larger then itself, then it will engage the particle and attempt to engulf it, but it will fail and as a result, the particle will persist in its location and with repeated exposure, may accumulate to reach a toxic dose (Donaldson and Poland 2013). Hamilton et al, showed that the fibrous shape and fibre length of TiO2 anatase influenced its effect towards primary mouse macrophages; relative to spherical nanoparticle (60-200 nm), fibre structures of greater than 15 μm created Poorly Soluble Particles / Lung Overload 14 ECETOC TR No. 122 a highly toxic particle (Hamilton et al, 2009). Altered phagocytosis efficiency for a given material in the lung will likely have a significant influence on the clearance efficiency which can ultimately lead to adverse effects, even despite the material's low intrinsic toxic potential. 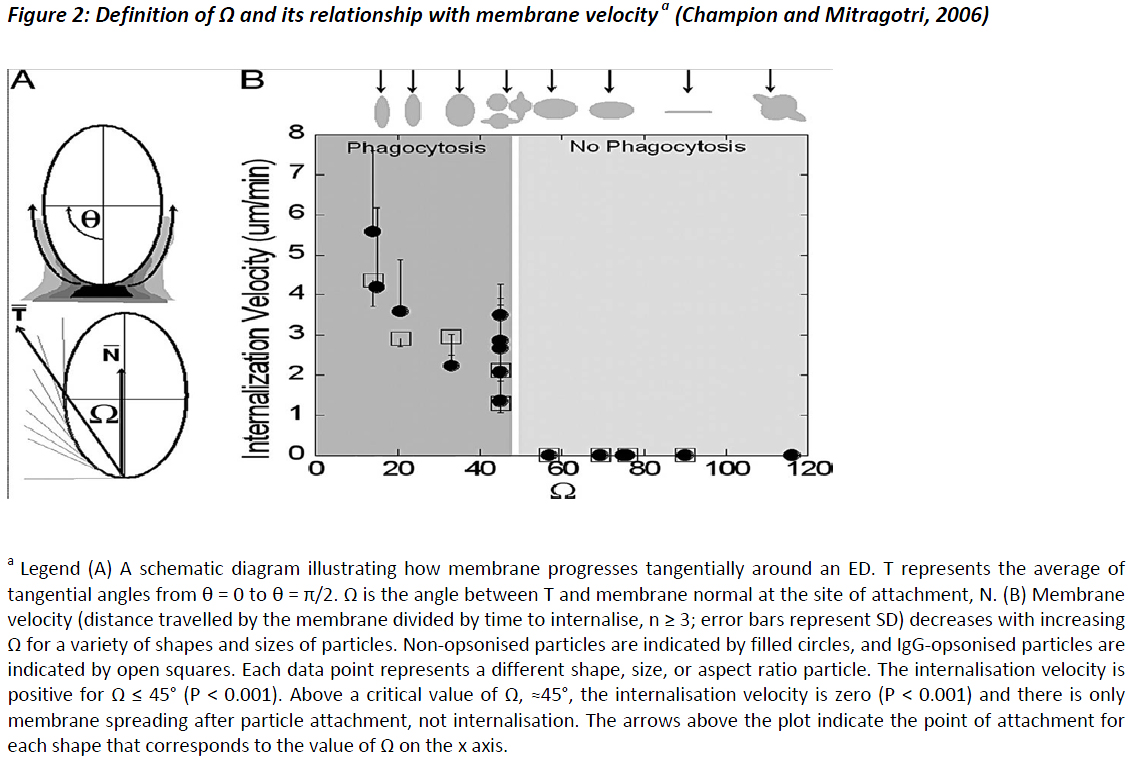