Toxicity data were compiled and screened and are available as part of the supporting information. Over 2000 individual data points were available. After screening the data for quality as outlined in Chapter 2, the number of usable data points decreased to just over 660 for 123 substances, which include acute and chronic data for fish, aquatic invertebrates and algae. This highlights the narrow availability of data that may be useful for critical analyses, including chemicals risk assessment.

Plots similar to those presented by Mackay et al (2009) for non-polar narcotics are seen in Figures 2 to 7, for a detailed examination of:

The data plotted in each figure were regressed, and the slope, intercept and coefficient of determination (R2) for MoA 1 and 2 substances are presented in Table 2. Values are not presented from plots on MoA 3 and 4 data as no direct relationship with hydrophobicity can be expected between reactive or specifically acting chemicals as the toxicity will be related to other mechanisms than hydrophobicity. However, the data have been plotted on the same graphical format such that the relative position of MoA 3 and 4 substances can be compared to those of MoA 1 and 2. MoA 2 regression slopes have also been included but due to lack of data and clear slopes and R2 values, these should only be used qualitatively. 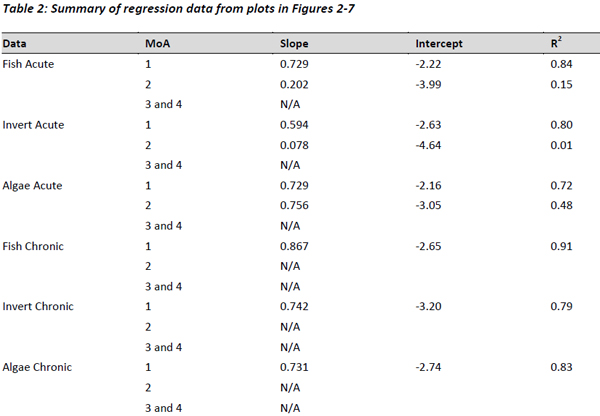