The relationships between chemical activity and adverse effects and no effect level estimates on aquatic organisms were explored by analysing only high quality toxicity data for various aquatic taxa and MoA. It was thus hoped to understand whether the observed variability of data in Mackay et al (2009) was due to data quality issues or the current capacity of the activity concept to quantifiably describe toxicity. In the first step, a database of critically reviewed data in the form of lethal, effect and no-effect concentrations (LCs, ECs or NOECs) in water corresponding to acute and chronic effect test endpoints was compiled. The chemicals were then assigned into four groups according to MoA (the Task Force choose to follow the Verhaar system). In the third step the aqueous solubility data was converted into a format suitable for establishing chemical activities. The resulting relationships between LCs, ECs, NOECs, solubilities and activities were then analysed and discussed.

The first critical step of this assessment was to obtain high quality data for a large number of substances. Various sources were used, including the newly disseminated European Chemicals Agency (ECHA) database (http://www.echa.europa.eu, retrieved June-December 2011) and the Ecetoc Aquatic Toxicity 3 database (ECETOC 2003).

The recent REACH regulation (EC, 2006) in Europe required the submission by industry of large amounts of toxicology data to ECHA. Data for large volume chemicals were submitted in December 2010, and disseminated in a reduced format to the public in 2011. As a part of this evaluation and registration, industry was required to perform a literature review and assess each study available for each of the substances registered. This provided a large resource of reviewed and validated toxicological and ecotoxicological data. The studies submitted for these registration dossiers had been classified according to the Klimisch rating (Klimisch et al, 1997).

The collection of these data for a large number of chemicals provides an opportunity to extract information from this ECHA database. Given that the REACH dossiers must also report the solubility of the substance in water, this allows the calculation of activity through the liquid solubility in water and direct comparison with validated toxicity results for a wide variety of substances. These dossiers were accessed through the ECHA online dissemination tool (European Chemical Agency retrieved June - December 2011 from http://www.echa.europa.eu).

For the purposes of the present study the REACH registration dossiers of a series of selected organic substances were examined. The submitted data on acute and chronic toxicity to fish, invertebrates and algae, as well as solubility, were reviewed. As an initial screening exercise, only data rated Klimisch 1 (reliable without restrictions) or Klimisch 2 (reliable with restrictions) were used. It must be noted that this screening depended on the Klimisch rating assigned by the REACH registrants. QSAR data were not used. Where a REACH registration dossier was not available for a particular substance, then other dossiers were used. In the case of some chlorinated substances that are no longer produced, Euro Chlor (Euro Chlor (1999-2006), retrieved October 2011 from http://www.eurochlor.org/download-centre/marine-risk-assessments.aspx) has published risk assessments under the framework of the OSPAR convention, including the Klimisch rating of studies. Additionally, since pesticides and plant protection products were not registered under REACH, data for these substances were mostly obtained from the US EPA Ecotox Database (Environment Protection Agency, retrieved October 2011 from http://cfpub.epa.gov/ecotox/). Other data were taken directly from peer-reviewed publications (McGrath et al, 2005; Thomas et al,) and other sources such as AQUIRE database. These were used after validation.

As discussed above, the concept fugacity has been used to describe the partitioning of substances into various environmental compartments. More recently, the related concept of activity has been compared to environmental concentrations in order to validate the approach and show the feasibility of using activity in environmental risk assessment. The recent availability of a large amount of high quality physico-chemical and ecotoxicity data from the REACH process had allowed the examination of these data through the prism of the fugacity approach.

After collection of the study details, the data were further reviewed for experimental errors and non-standard conditions, such as open systems for volatile substances, as well as studies with a reported NOEC or E/LC50 higher than the reported water solubility were excluded. For acute endpoints, only standard durations for each trophic level were deemed appropriate. Sub-chronic results were rejected as unsuitable for meeting the chronic toxicity endpoint. In addition, non-standard regulatory effects endpoints were not accepted. Studies that reported only nominal concentrations for volatile substances were also excluded. Data were preferentially obtained from the same dossier where multiple dossiers exist for a single substance. The studies from dossiers not submitted to ECHA were also reviewed for non-standard conditions.

Despite best efforts, the methodology applied is not sufficient to completely guarantee that all the included endpoints are free of scientific error or inadequate reporting. However, the authors believe that the methodology has provided a high quality dataset with reduced uncertainty.

Data on the solid or liquid solubility of the chemicals in water, melting point and molecular weight of each substance were collected at the test temperature. For liquids, the fugacity ratio F, as previously defined, is equal to 1.0 and the liquid solubility was used directly. For solids, F was calculated and the higher sub-cooled liquid solubility calculated as the solid solubility divided by F. The solubilities, typically reported in mg/L were converted into mol L-1. For substances that are miscible with water, a hypothetical solubility of 55.5 mol L-1 was used as reported by Mackay (2001), i.e. the reciprocal of the molar volume of water. A more accurate conversion could be made using a reported activity coefficient or a vapour pressure and Henry’s Law Constant but this applies to relatively polar chemicals.

The substances selected were also divided into four groups according to the Verhaar and modified Verhaar classifications (Verhaar et al, 1992; Verhaar et al, 2000; and Enoch et al, 2008). Mode of action was established using the Toxtree software (Patlewicz et al, 2008 and Joint Research Centre of the European Commission, 2011, retrieved August 2011 from http://ihcp.jrc.ec.europa.eu/our_labs/computational_toxicology/qsar_tools/toxtree). Class 1 substances are the non-polar narcotics, which are expected to show baseline toxicity only. Class 2 substances are polar narcotics which are expected to show slightly higher toxicity. Class 3 refers to those substances containing a reactive group, which can react in a non-specific manner with biomolecules, leading to higher toxicity. Class 4 substances are those that interact with specific receptors within an organism causing toxicity (see Table 1). 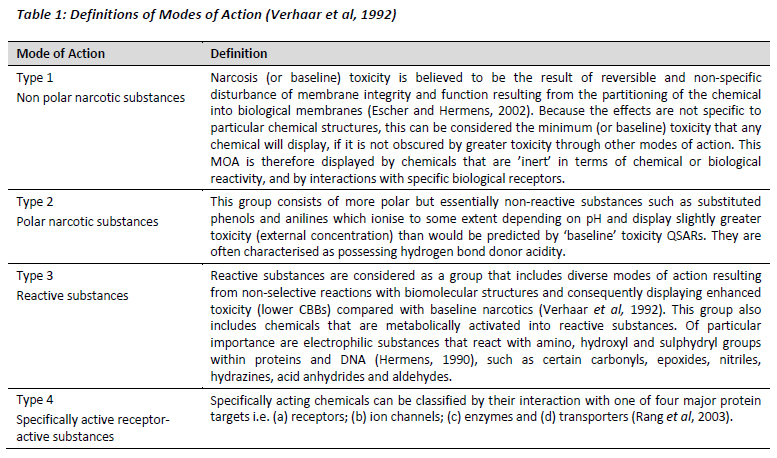 The data collected were compiled into a single dataset in Excel (available in the supporting Appendix B). The data for acute fish, acute invertebrate, acute algae, chronic fish, chronic invertebrate and chronic algae studies were separated into different data sheets, and the log E/LC50 plotted against the log liquid solubility in water.

Similar graphs to those presented by Mackay et al (2009) have been prepared using homogenous datasets when possible for a detailed examination of:

The results of individual substances were reviewed, and if sufficient evidence was observed to justify a change of class, the MoA was reassigned.

To determine whether the slopes of the graphs may be reduced by failure to reach equilibrium within the test duration for low solubility substances, an existing method (Spacie and Hamelink (1982) included in an Annex of OECD 305) was used to obtain an approximate value for the equilibrium time at various log KOW values and these were then related to the solubility data. This method uses the following equation to provide an approximation of time to reach equilibrium assuming that the water concentration is constant: 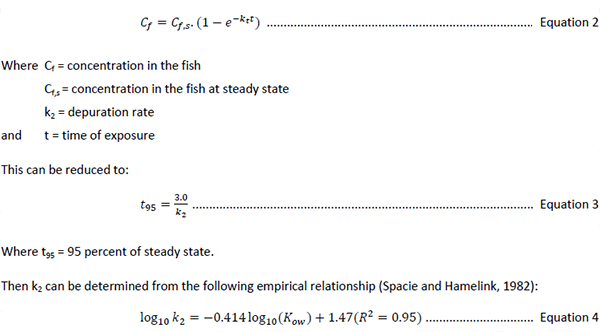 The log KOW at 95% equilibrium for a study duration of 96 h was correlated with the solubility to determine the corresponding cut-off value (see Figure 1). From the graph, at log KOW 4 the equivalent solubility would be approximately 10-4 mol L-1. This value was used to compare slopes of data at, and prior to, equilibrium for fish.