Since the introduction of the TRA in 2004, many thousands of users have downloaded the tool and its supporting technical guidance from the ECETOC website. In addition to the guidance contained in the tool’s User Guide, ECETOC has supported the TRA via a help facility and has described its technical basis in ECETOC Technical Reports TR93 (2004), TR107 (2009), TR114 (2012) and TR124 (2014). Since 2010, the worker and consumer modules of the TRA have been used as the basis for estimating human exposures to chemicals within ECHA’s Chesar Chemical Safety Assessment (CSA) tool. Because the implementation of software is seldom straightforward, the process for implementing the TRA within Chesar has involved discussions between ECHA and ECETOC. These have aimed at resolving technical issues, but have also served to highlight areas where the available TRA guidance may be strengthened. These discussions led, in part, to the domain clarifications provided in TR124 together with the enhancements relating to the assessment of infrequent uses of consumer products. This report addresses many of the technical questions that either ECETOC or ECHA have received since 2014 and for which further clarification was thought to be needed or useful. The report also deals with areas aimed at improving the tool’s flexibility based upon information that may be available to users. ECETOC has also continued to review the performance of the TRA, taking part in and advising on a range of studies that have sought to validate the performance of different elements of the TRA, notably the German Federal Institute for Occupational Safety and Health (BauA)-sponsored ETEAM study. Furthermore, via the CEFIC-LRI and other industry science programmes, research has been initiated that further aims to explore the functioning of the TRA. This report summarises some of the key findings that affect the TRA. ECETOC Technical Report no.131: Targeted Risk Assessment: Further Explanation of the Technical Basis of the TRA v3.1 has been published in February 2018. 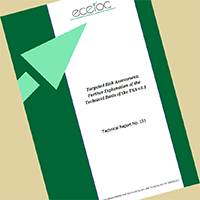