Despite being regarded as biologically inert, many poorly soluble substances can still cause toxicity when high concentrations of small particles are inhaled repeatedly over a long time. This phenomenon is known from studies in laboratory animals as 'lung overload'. Normally, it begins with a reduction of lung clearance (less particles are removed due to diminished alveolar macrophage activity), followed by lung inflammation. This happens in all animal species, including hamster, mouse, rat, and primates. Rats appear to be particularly sensitive and eventually some develop lung tumours. The other species are less sensitive to these inflammatory changes and do not develop lung tumours.

The toxic effects are mainly caused by 'oxidative stress' and are independent of particle size (micro, nano, fine). Each species has a different level and pattern of oxidative stress and toxicity, which is probably related to differences in particle retention, distribution, clearance and detoxification in the lung.

So far, using epidemiological studies, lung tumours from particle overload have not been found in humans.

The animal studies indicate a clear toxicological threshold for these inflammatory events related to the dose of inhaled particles (no adverse effect level, NOAEL), and also for the development of tumours in the rat. This enables, for instance, the derivation of a no-effect level (DNEL) in humans or the setting of an occupational exposure limit value (OEL). Direct extrapolation of the effect levels from animals to humans (1 to 1) is warranted.

Traditionally, many poorly soluble particles have been generally considered to be biologically inert and of low toxicity. However, under conditions of chronic inhalation exposure to high concentrations, such particles have been shown to produce a variety of unexpected toxicological effects, including a decrease in particle clearance from the lung as well as pulmonary inflammation (Lee et al, 1985). The attempt to explain this phenomenon led to the general hypothesis of 'lung overload' which was typified by impairment in alveolar macrophage (AM) mediated pulmonary particle clearance and loss of AM mobility (Morrow 1988). Numerous studies focusing on the possible mechanism, especially with regard to observed species differences have been published since then. This culminated in a comprehensive review by an ILSI expert group in 2000, in which a possible rat-specific effect pattern of 'lung overload' was discussed. In fact, the noted higher sensitivity of rats to non-neoplastic anduniqueness to neoplastic lung changes had raised questions on the appropriate use and interpretation of the responses of the rat as an animal model for hazard identification or quantitative extrapolation and risk characterisation.

More recently, the phenomenon 'lung overload' regained importance due to the necessary derivation of 'Derived No Effect Levels' (DNEL) under the REACH legislation and the setting of 'health based' Occupational Exposure Limits (OEL), as well as for classification and labelling under the Globally Harmonised System of Classification and Labelling of Chemicals (GHS / CLP).

This ECETOC Task Force was convened to examine the current scientific understanding of the 'lung overload' hypothesis. In this respect, the review was required to present and discuss new findings on lung toxicity of such low soluble particles of low toxicity and its mechanistic interpretation, as well as to address the progress made concerning the knowledge of the underlying mode of action and its relevance for human risk assessment. Special emphasis was given to the question if the rat is an appropriate model for the extrapolation of 'lung overload' related pulmonary effects to humans.

The synopsis of currently available scientific data on 'lung overload' allows the Task Force to conclude, that:

· The rat represents a particularly sensitive model concerning the development of pulmonary non-neoplastic lesions and, moreover, a unique model with regard to lung neoplastic responses under conditions of lung overload.

· Humans are less sensitive to 'lung overload' as epidemiological studies thus far have not been able to detect an association between occupational exposures to poorly soluble particles of low toxicity and an increased risk for lung cancer.

· The measured differences of particle retention, distribution and clearance patterns in thelungs of exposed rats vs. primates or humans, may account for both the greater sensitivity in rats and corresponding differences in pulmonary pathological responses to long-term particle exposures

· Slight differences in the bio solubility of deposited 'poorly soluble particles' in biological fluids may influence chemical dissolution and based hereupon accelerate or slow down the process of lung overload development.

· The mechanisms leading to an oxidative and inflammatory pulmonary status are clearly threshold related.

· There is no 'nanoparticle-specific lung overload toxicity' and mechanistic findings for conventional 'micro' particles apply also for nanostructured particles.

Finally, there is substantial evidence exemplified in a number of studies that poorly soluble particles of low toxicity, whether nano sized or micro sized, exert their toxicologically relevant non-neoplastic effects and also the neoplastic responses in rats, via a threshold mediated mode of action. Hence, the derivation of DNELs for poorly soluble (nano) particles of low toxicity is toxicologically justified. Due to the higher sensitivity of the rat compared to humans and based on comparable biokinetics, an overall assessment factor of 1 for intra- and interspecies differences is considered sufficient. DNELs based on NOAELs/NOAECs as derived in animal inhalation studies and adjusted for human equivalent concentrations by appropriate dosimetry modelling is recommended.

Since the ILSI 2000 report, there has been a vast amount on in vivo and in vitro work on poorly soluble particles of low toxicity but there have been no compelling studies or a weight of evidence that would allow the Task Force to conclude that the rat lung overload findings is a reliable predictive model, in particular for neoplasia, with regard to hazard or risk assessment for humans who are exposed to poorly soluble particles of low toxicity. 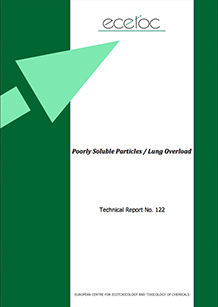