TR 120 – Activity-Based Relationships for Aquatic Ecotoxicology Data: Use of the Activity Approach to Strengthen MoA Predictions

Technical Report no.120. Activity-Based Relationships for Aquatic Ecotoxicology Data: Use of the Activity Approach to Strengthen MoA Predictions

The relationship between the toxicity of narcotic chemicals and the octanol water partition coefficient (KOW) has been widely explored. An alternative but closely related property can be used to directly frame toxicity within the concept of phase equilibrium thermodynamics. This property, termed chemical activity, is inversely proportional to solubility, proportional to toxicity and should be applicable for the prediction of effects in aquatic species.

The ECETOC document employs an extensive set of existing data, and provides a proof of concept for the relationship between chemical activity and toxicity for narcotic chemicals. The task force used published methodology and freely available software to classify the data according to Mode of Action (MOA). The analysis of MOA 1 (non-polar narcosis or baseline toxicity) substances shows promise as an alternative to KOW-based predictions of effect. The data also brings to light a lack of high quality chronic aquatic toxicity data in general and in particular for substances outside the MOA 1 domain.

The relationship between chemical activity (as defined by phase equilibrium thermodynamics) and toxicity of narcotic chemicals was originally hypothesised at the end of the 1930s but has only recently been revisited by Mackay et al (2009). The work of this task force demonstrated that chemical activities can be used to determine toxicity for narcotics for any species (including mammals, fish, invertebrates) regardless of the exposure medium as the toxic effect is hypothesised to occur at a specific activity in the organisms (estimated by the above authors at around 0.01). Thus, toxicity can be substituted for another form of activity such as a physico-chemical parameter (e.g. solubility) and the regression slope of this parameter versus toxicity is expected to be 1. Nevertheless, the authors found that in practice the slope for thisrelationship is actually closer to 0.8. ECETOC set out to explore this relationship further using a highquality dataset and consider its potential for use as a QSAR to estimate acute and chronic toxicity for non-polar narcotics.

The following conclusions can be made based on this exercise:

· The results of this report are in line with those of previous work (Mackay et al, 2009);

· For MoA 1 substances the task force found strong similarities in slopes for both acute and chronic data between the trophic levels examined suggesting that for baseline narcosis, specific species characteristics (behaviour and biology) may play a minor role in determining toxicity at equilibrium;

· For MoA 1 substances, the intercepts for chronic activities were systematically lower (approximatelyhalf a log unit) than those for acute activities, in general agreement with the basic understanding of chemical activity;

· For MoA 1 substances, equilibrium of high log KOW substances does not always appear to be reached within the timeframe of the standard acute toxicity test (from approximately log KOW 4-5);

· This work, which separated MoAs and their relative activities, is in line with data from Verhaar and Russom (Verhaar et al, 1992; Russom et al, 1997) considering differences in activity for each MoA. From the relative activities for each MoA it does not appear possible to systematically determine the MoA from acute toxicity data alone (i.e. some MoA 3 or 4 values may be higher (closer to a slope of 1) than expected based on acute values). Nevertheless, no evidence was found in this study that substances behave as narcotics at acute level and specific MoA in chronic studies. The only cases found were of substances considered to be MoA4 (e.g.chlorobutadiene) which showed no evidence of specific MoA in either acute or chronic studies;

· From this work there are various cases which have been reclassified based on Enoch et al (2008) (forcertain MoA 2 substances). Other instances were also determined, indicating that care should be taken when identifying MoA (e.g. hexachlorobutadiene and hexachlorobenzene);

· MoA 2 data appeared to be completely different (trend lines, intercepts) from the MoA 1 data when plotted, and the dataset should be considered with care due to differences between ionised or unionised states at physiological pH and other confounding factors;

· The task force recommends that a high quality database should be developed based on appropriate technical protocols and incorporating techniques such as passive dosing which would improve the predictions and understanding of activity relationships within and between MoAs;

· The activity concept has not yet been applied in risk assessment. This task force is of the opinion that this work demonstrates proof of concept for application in the development of QSARs to predict acute and chronic toxicity. Ultimately these QSARs could reduce both acute and chronic experimental studies in a regulatory context. 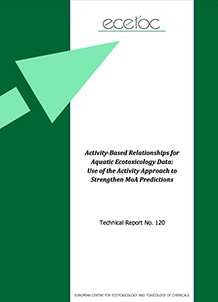