Workshop Report no.34 – Improvement of the OECD 306 screening test

Previous ECETOC workshops recommended a series of modifications and enhancements to existing OECD biodegradation screening tests (BSTs) to deliver more robust methods for assessing persistence. Specific enhancements investigated included enhanced test durations and investigating the impact of biomass density and diversity on the probability of observing biodegradability. These methods were designed to minimise the high variability and poor reliability previously reported in OECD BSTs, such as the OECD 306 marine biodegradation test, whilst increasing the ecological relevance of the study. The Cefic-LRI funded ECO11 project investigated these enhancements, producing a framework for selecting the most suitable inocula cell concentration method for improved enhanced activated sludge (c.f. OECD 301) and marine tests (c.f. OECD 306). In parallel, there has been increasing recognition that marine biodegradability tests, which are an intrinsic part of offshore chemical control schemes, need to be developed and improved.  This recognition has come from industry, practitioners (contract research organisations), and regulators, owing to the emphasis being placed on the OECD 306 in the pre-screening of offshore chemicals under the OSPAR Harmonised Mandatory Control Scheme (HMCS). To assess whether the findings of the ECO 11 project could be used to improve marine biodegradability assessment, Cefas hosted a workshop in February 2015, which: The workshop identified various areas that could influence the outcome of marine biodegradation tests and recommended several practical steps to improve the current situation.  These are captured in the workshop report and have been used to develop a protocol for a ring test which has been subsequently initiated as an extension of the Cefic LRI ECO 11 project. This report will be of interest to academic researchers, contract research organisations, industrial environmental fate assessors, and regulatory bodies involved in the identification, characterisation, risk assessment and risk management of potentially persistence substances. 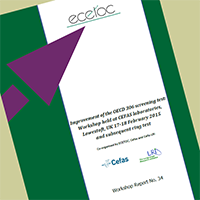