Brussels, August 2016 This ontology provides a way for data and information on developmental toxicology from different sources to be structured and shared in an understandable way. By using a common vocabulary and a user friendly structure, it is envisioned that this particular ontology will allow scientists to make connections and understand relationships between common pathways resulting in adverse reproductive health outcomes. Such a tool will help scientists and toxicologists predict the possibility of a substance producing developmental toxicity without the need for comprehensive animal testing. It is intended that this ontology can support work currently ongoing at the OECD to reduce reliance on animal testing by moving to a better understanding of the modes of action and biological pathways causing toxic effects. A paper is also in preparation to be published in the Open Scientific Literature. READ ONLINE

This report discusses the need for a systematic representation of knowledge about developmental toxicity (i.e. an ontology) that would enable computer-based prediction of which chemicals are likely to induce human developmental toxicity. The focus of the report is on ways of building a foundation for such an ontology, based on knowledge of developmental biology and mode of action/adverse outcome pathways (AOPs) in developmental toxicity. The ontology should include as much biology and signalling mechanism pathway content that current science allows.   It will be necessary to build a Resource Description Framework (RDF) database to house not only the ontology but also the chemical data needed to assess perturbations to developmental processes. In order to start, terminology and relationships from qualitative, putative AOPs will need to be assembled. Ultimately, with the application of quantitative chemical bioassay data, we will be able to populate quantitative, confirmed AOPs. The implementation of this ontology-described database will also require consideration of the non-linearity of dynamic biological systems, the influence of critical periods in development, and, ideally, the influence of maternal toxicity. This report discusses some of the challenges in building a developmental toxicity ontology and RDF database. It also discusses some of the currently available, web-based resources for building AOPs. Case studies on one of the most well understood morphogens and developmental toxicants, retinoic acid, are presented as examples of how such an ontology may be built up. The potential for the use of the rapidly expanding data in the ToxCast program is also explored. 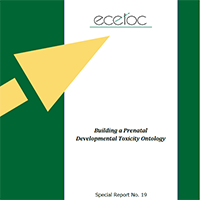