After the opening presentation in which Leo Posthuma covered the broader aspects of using SSDs in environmental protection and management, emphasising their origins and utility, the focus shifted to ecological considerations. How can a small set of toxicity data from a limited number of species, be used to assess risks or potential impacts in real world situations? Ecosystems differ, covering a range of different habitats, geographic locations and contain differing assemblages of species with complex, maybe unknown interactions. It is not unreasonable to assume that individuals, species, communities and ecosystems will all differ in their sensitivities to stressors, including chemicals

The many ecological considerations raised with respect to SSDs were covered by the various presentations and highlighted in the questions posed and the responses given in the Syndicate Sessions. There was considerable discussion about the importance of species sensitivities and traits, particularly reproductive strategies, community structure and resilience, ecological redundancy, warm, cold, salt and freshwaters and the importance of considering modes of action of chemicals.

It is recognised that establishing protection goals is the important first step in the process. SSDs are used in both prospective risk- and retrospective impact assessment of chemicals. Prior to the registration of a particular chemical use and consequent environmental exposure, a prospective risk assessment needs to establish that its use will not cause unacceptable risk. In contrast, retrospective impact assessment uses diagnostic tools to identify the cause of existing adverse effects, including chemical thresholds, to quantify expected impacts. Prospective assessments need to be protective, generally deriving a single value from an SSD using the inverse method – establishing the concentration at which there is a tolerably low risk of an unacceptable effect. This is done when setting Environmental Quality Standards (EQS) for water quality, deriving Predicted No Effect Concentrations (PNECs) under REACH or Regulatory Acceptable Concentrations (RACs) under EU Plant Protection Product legislation, with similar procedures oriented on deriving and using quality standards in other jurisdictions.

It is important that the estimate or prediction is protective; perhaps with the proviso that it should not be over-protective and restrict safe chemical use. However, it is less important than, for example, correctly positioning each species within the distribution. There was some difference of opinion at the workshop about the potential for deriving valid generic PNEC values, i.e. a concentration that assures protection under all circumstances. However, limited data were presented to suggest that provided the protection goal is to achieve no worse than negligible effects, it is possible to derive a generic PNEC from an HCx derived from a generic SSD by applying appropriate assessment factors. As discussed in syndicate group 1B, a consequence of using a generic SSD to protect all ecosystems (including the most sensitive) implies that the margin of safety would vary when considering less-sensitive systems, and there is the potential to be overprotective, leaving scope for refinement in decision-making at higher tiers of assessment.

SSDs can have a role as a diagnostic tool in a site specific, retrospective assessment where they can help assign causality (‘reasons for poor status’) or perhaps in site remediation. In these situations, an SSD is used in a predictive and quantitative manner, quantifying expected impacts (as the fraction of species potentially affected when exposed to a contaminated sample). In this sort of application, the SSD needs to reflect reality for the ecosystem of concern and a site or scenario specific assessment is more likely to be representative.

Whilst SSDs have been, and continue to be applied across different sectors, there is still much to understand to allow them to be used more widely and confidently in taking environmental management decisions. Undoubtedly, questions remain about further field validation. Further insight into some of the considerations explored within the syndicate groups will allow the use of SSDs in a more flexible, perhaps less prescriptive manner when needed, increasing their versatility as one of the available tools for ERA.

The workshop has been effective in drawing together a range of highly relevant skills and experience from around the world. The focus on regulatory applications of SSDs is both rewarding and refreshing, as there are multiple practical and societally valued uses whilst there is a clear view on method limitations too.

Regulators are placing increasing reliance on the use of SSDs because it is thought that they make better use of the available data, have more relevance to threshold effects in the real world than traditional deterministic methods, and encourage all interested parties to think about the relationship between chemical exposure and risks to wildlife, and the environment on which the services we use depend. The regulatory communities around the world are starting to see the application of SSDs to other stressors (e.g. radionuclides) and to help understand risks from mixtures, and to situations of site-specific contamination where we need to account for the many other factors that can influence decision making. This is a very welcome development.

The wider uptake of SSDs is prevented by a perception that the approach is ‘data hungry’ so that only a small proportion of substances satisfy the minimum criteria that were set 3 decades ago for United States Ambient Water Quality Criteria and a decade ago for REACH in the context of deriving methods for transparent and reproducible derivation of protective quality criteria using NOECs as test endpoints. It is interesting to learn that, under some circumstances, useful insights can be gained and progress can be made with quite small datasets, and/or with data sets collected in the context of a novel problem, such as the use of EC50-based SSDs for ranking sanitation priorities. The development of non-testing approaches for augmenting test data to be fed into SSDs, or making better use of the data we already have, is particularly exciting. The prospect of a more rational approach to the selection of assessment factors is also encouraging because this will make the process of EQS derivation more transparent and reproducible. Some of these techniques can be applied in a regulatory context almost immediately. Regulators are seeing a greater interest in the ecological relevance of the way SSDs are constructed and/or interpreted. This is exemplified by studies where ecosystem differences and characteristics are actively taken into account in deriving and using SSDs; a better understanding of protection goals and the ecological significance of our risk management decisions is of considerable regulatory relevance. 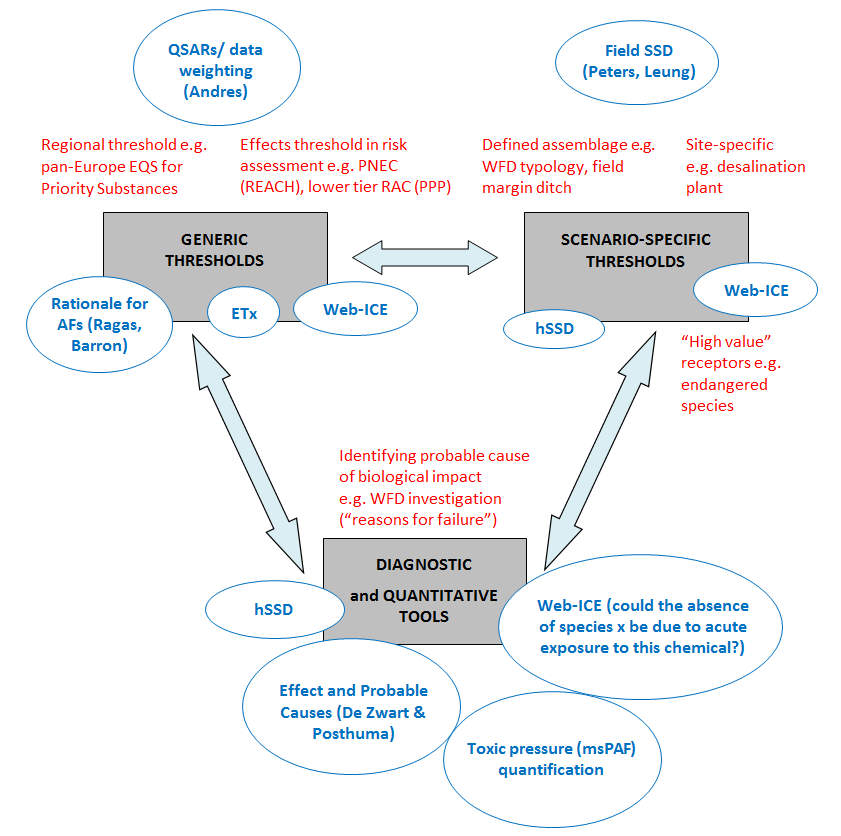 Perhaps this sort of thinking will help identify where certain tools have a particular role to play. This could be further enhanced by thinking about the particular strengths of the various tools and techniques. Figure 2 was developed after the workshop but illustrates how the various tools and techniques now available could help deal with some of the challenges faced by risk assessors and regulators.

Even when regulators are able to call upon a wider range of techniques (as is now probably the case), there will be a need for value judgement and this could give rise to different interpretations even when assessors are presented with the same information. Sometimes this will not matter but, for some questions, such as the development of pan-continental generic thresholds, this can be a problem. The preferred response is not to further restrict flexibility in technical guidance because this will only ‘fossilise’ the science and innovation. Instead, the regulatory authorities support the idea of devising guidance that prompts the assessor to think carefully about the protection goal (e.g. generic protection, local protection, contaminated site assessments), what is known about the particular case (e.g. local water chemistry conditions), the uncertainties being dealt with, and the growing range of tools now available.

There was general consensus that scientifically sound extrapolation approaches and even relatively minimal dataset SSDs can be better alternatives to deriving toxicity threshold concentrations/PNECs than the application of generic assessment factors to simple aquatic toxicity tests, However, continued validation against field and mesocosm data is required to ensure that a threshold like an EQS or PNEC has ecological relevance. Furthermore, the results of extrapolation from SSDs should be critically assessed using all available knowledge on the substance and related substances. It was agreed that the SSD methodology is a valuable regulatory and management tool since it can give more insight into the potential ecological effects than the assessment factor method (enabling better problem definitions) and it yields more generalisable results than a mesocosm-based methodology. However, it is important to validate predictions of risk or thresholds such as EQSs against field and mesocosm data.

It was proposed that a compendium of current best practices, the state of the science and answers to frequently asked questions would facilitate acceptance of SSDs by regulators and risk managers and their implementation in regulation and management. The compendium should be a technical document aimed at users with knowledge of SSDs and ecosystems. However, this could limit the usefulness of the compendium and therefore another document suitable for a general audience is also necessary.

There are a range of statistical SSD tools in use which can vary with regional regulatory application. For example the ETX tool is accepted for use in regulatory risk assessments in Europe. ETX uses data from acute or chronic toxicity tests as does the BurrliOZ tool used by Australian and New Zealand regulators although the latter applies the Burr family of distributions. Other variations of ETX-type tools are used in other jurisdictions such as Canada and China. A rather different tool, Web-ICE is available for regulatory use in the USA. Web-ICE uses both measured toxicity test data for a test chemical as well as estimated toxicity values based on interspecies correlations. There is a helpful guide for users to avoid inappropriate use of the tool, e.g. deriving HC5 values outside reasonable statistical limits.

Other examples of available tools include Mosaic and a tool developed by P&G using the R software. Both of these represent variations or extensions on the ETX approach. The hSSD tool developed by Peter Craig at the University of Durham uses taxonomic patterns of sensitivity and generates SSDs for specified communities. This prototype tool was considered to be statistically rigorous but requires more evaluation to determine its applicability in risk assessment.

Research needs for SSD tool development include the following considerations:

Given the various uses of SSDs discussed at the workshop, and the use of SSDs in decision support situations ranging from generic to specific, it is evident that application of expert knowledge can improve decision making when doing practical assessments of problems with chemical in the environment.