Whereas the KOW of a substance is defined as the ratio of the concentration in octanol and water for the neutral species, for ionisable organic compounds, the distribution ratio is defined as:

The magnitude of DOW may nevertheless be relatively large, regardless of changes in pH, particularly if the molecule contains a significant hydrophobic component, whereby the dissociated form may still behave similar to the neutral species. The type and amount of counter ions present in the test system can also significantly influence the partitioning behaviour (Csizmadia et al, 1997). Thus, estimating the octanol-water distribution ratio of an organic acid or base requires consideration of a variety of species in both phases.

In general terms, it has been observed that the partition coefficient of the neutral species is typically more than two orders of magnitude larger than the distribution ratio of the ionic species. Thus at pH < pKa +2 for acids and pH > pKa -2 for bases, the neutral species is the dominant species in determining DOW. While this general rule has been shown to apply to monoprotic substances, complications arise when faced with polyprotic or zwitterions, where the problem of predicting log DOW becomes more complicated (Csizmadia et al, 1997). Nevertheless, assuming that only the neutral form of the molecule will partition into the organic phase, it should be possible to estimate the log DOW value of a substance from log KOW and pKa as:

If the molecule in question has several functional groups that can be ionised, resulting in more than one pKa value, correction terms must be included in the above equation for each species (see for instance Csizmadia et al, 1997). Thus, log DOW can be subject to error due to errors in both log KOW and pKa predictions (Livingstone, 2003; Kah and Brown, 2008). Of the log KOW estimation methods assessed here, only ACD/logD and SPARC have the capacity to estimate log DOW. ALogPS does have the capacity to estimate log DOW based on self-learning properties of associative neural networks, but the method requires measured data of chemicals with similar structures to be input. The method utilised by ACD/logD and SPARC is based on the approach described by (Csizmadia et al. 1997).

In an effort to investigate the relative performance of both ACD/logD and SPARC to estimate log DOW values, the estimates were compared against measured data reported for chemicals in Appendix F. Figure 12 summarises the comparison between the different methods and measured data.

The data indicate that a good, linear and positive correlation between measured and calculated log DOW values is given. Considering that calculations of log DOW largely depend on the accuracy of pKa and log KOW, the bases were separated from the acids and zwitterions, as done in Figure 10, to assess any changes in relative performance. The results indicate a significant decrease in the predictive powers of log DOW for bases using either SPARC or ACD, which is most likely related to poorer predictions of pKa for bases, as shown in Figure 13 on the left. The graphs on the right side of Figure 13 illustrate that both SPARC and ACD perform better for acids/zwitterions than they do for bases. It is suggested that to further highlight the importance of having good estimates and/or measured data to assist in estimating log DOW. 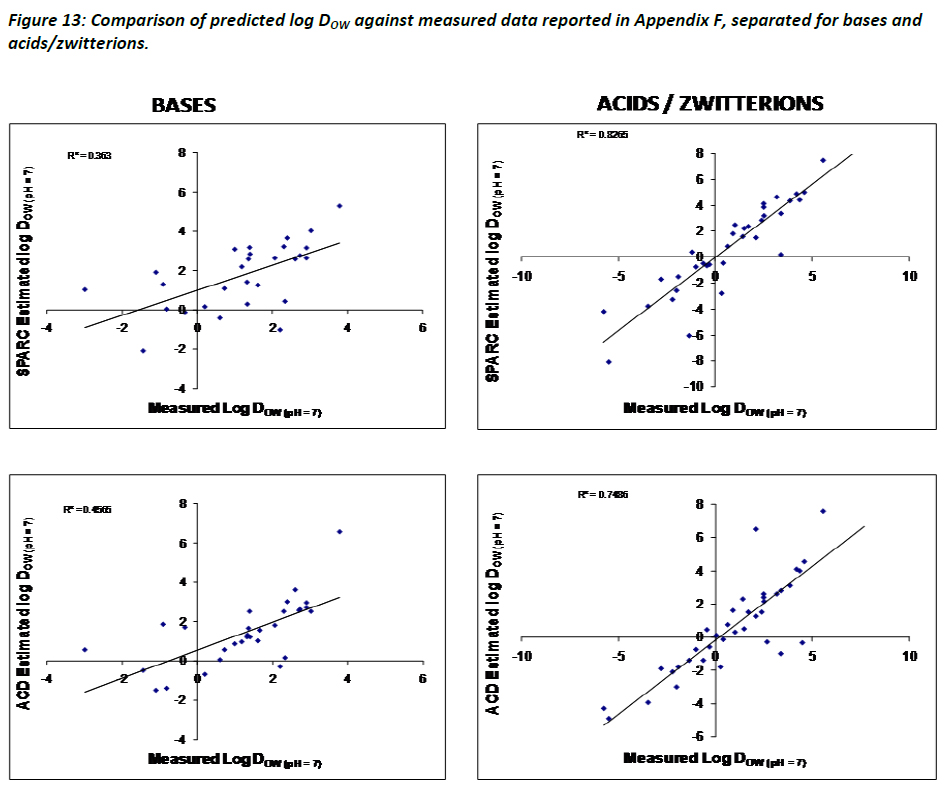